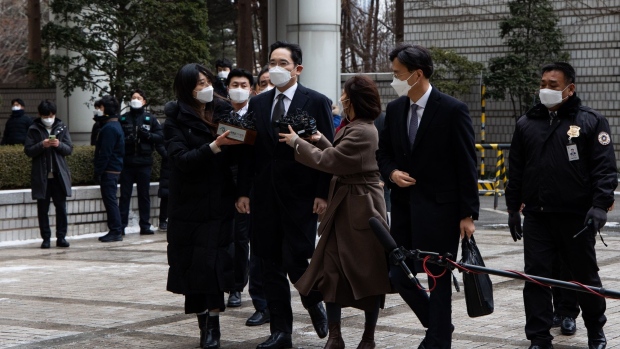 (Bloomberg) -- For most of Moon Jae-in’s presidency, the prosecution of Samsung Group’s de facto leader was the clearest evidence he could cite to show South Korea was rolling back preferential treatment for the country’s powerful tycoon class. Now, he’s considering whether to free Jay Y. Lee from jail in a decision that could shape his final year in office.

The dramatic reversal reflects South Korea’s claustrophobic politics, where government leaders and big business are so dependent on each other that favoritism can trump the law. Polls show almost seven in 10 Koreans now support a pardon for the vice chairman of Samsung Electronics Co. as the country tries to navigate an end to the coronavirus pandemic and a crisis in the crucial semiconductor industry.

Lee, 52, was convicted of using bribery and corruption to take control of Samsung, and for years there was little prospect of leniency. That began to change when he was sent to jail earlier this year for a second stint.

Leaders of Korea’s other chaebol began to call for a pardon so Lee could help address severe shortages in the chip industry, while politicians who had once supported his jailing reversed course in hopes he could help secure Covid-19 vaccines. Samsung then emerged as a key player in Moon’s summit with U.S. President Joe Biden in May.

One highlight of the presidential gathering was an agreement for Samsung Biologics Co. to produce Moderna Inc.’s vaccine in South Korea. Behind the scenes, Samsung’s pledge to invest $17 billion in the U.S. for an advanced chipmaking plant helped facilitate the vaccine deal, according to people familiar with the matter.

After the summit, Moon invited chaebol leaders to the Blue House to thank them for their investment package in the U.S. He said he’s aware of the public “sympathy” for a Lee pardon, his first public remarks on the matter.

“Moon and his administration would have recognized the value of Samsung and how it plays a pivotal role in reviving the country’s economy,” said Shin Yul, a political science professor at Myongji University in Seoul.

Why Samsung’s Billionaire Heir is Headed Back to Jail: QuickTake

Samsung is the South Korea’s biggest conglomerate, or chaebol, with operations in everything from hospitals and medicines to appliances and semiconductors. Samsung Electronics alone employs about 287,000 people globally and accounts for more than 20% of the total market capitalization of the main board of the country’s bourse.

While Moon only gets a single term in office and won’t run in next year’s election, setting Lee free via a pardon or parole would anger some of the president’s top supporters and could hurt the chances of his party to retain power. And it would also taint the legacy of a man who once vowed to abolish South Korea’s “chaebol-focused growth strategy.”

The progressive wing of Moon’s own Democratic Party has strongly objected to the idea of pardoning Samsung’s boss.

“Lee’s case is a problem of bribery and using company’s money illegally,” Park Yong-jin, a presidential candidate for the Democratic Party, said in a phone interview. “At the end of the day, it’s a matter of justice and we need to stick with that principle.”

Political activists also decried the prospect that Lee would get special treatment because of his connections. Moon was elected to replace a president who was impeached because of the Samsung scandal. Plus, Jay Y. Lee’s father, Lee Kun-hee, was pardoned twice -- in 2009 and 1997.

“The current government and the ruling party must remember that if Lee is pardoned or released on parole, it will be recorded as another chaebol preferential treatment and as a historical stain,” People’s Solidarity for Participatory Democracy, an activist group, said in a statement.

Freeing Lee through parole would be less controversial. The Justice Minister could approve parole without seeking consent from the president, meaning Moon would not have to be directly involved.

But that would leave uncertainties for Samsung. While Lee would be able to return to work immediately after a presidential pardon, he would have to take legal steps after parole to win exemption from a five-year employment restriction. Lee will be eligible for parole in August after serving 60% of his 30-month sentence.

“The Moon government may be busy calculating the political advantages and disadvantages before making a decision between pardoning or paroling,” said Park Ju-gun, head of research firm Leaders Index.

The decision may help determine who leads South Korea next year. Moon’s public support has sunk to near record lows because of dissatisfaction with his handling of runaway real estate prices and income inequality. That could open the door for the leading opposition group, the People Power Party, take over the Blue House.

The PPP lost power to Moon’s Democracy Party in part because of corruption allegations against its two past presidents. But the opposition group is repositioning itself as the leader of reform.

The PPP is seeking to entice the country’s former top prosecutor, Yoon Seok-youl, to become its candidate for the top office. He is the very man who led the investigation into Lee and put him in jail. He also prosecuted Moon’s predecessor, Park Geun-hye, sending her to prison in 2017. Yoon hasn’t taken a public stance on pardoning Lee.

If Moon does decide to pardon Lee, it will likely happen on the country’s Liberation Day August 15. In South Korea, presidents usually have granted pardons on the day or Christmas.

It’s not clear whether that would end Lee’s legal troubles. He is on trial in a second, related case, involving the merger of two Samsung units. That trial could spill into next year.