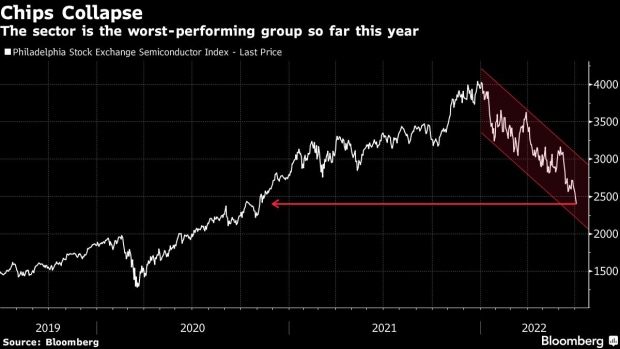 Operating profit rose to 14 trillion won ($10.7 billion) for the three months ended June, South Korea’s biggest company said Thursday in a statement. Analysts had estimated 14.6 trillion won on average. Sales increased 21% to 77 trillion won, slightly above estimates. Samsung will provide net income and split out divisional performance with its full report at the end of this month.

The Korean electronics giant is among the first major tech firms to report earnings after a pivotal quarter for the industry. The company’s primacy as a memory chips supplier and leading smartphone maker means its decelerating profit growth is likely to deepen concern about tech demand across enterprise and consumer sectors.

Samsung’s smartphone shipments in the second quarter might have fallen by more than 10 million units to 63 million compared to the previous three months, according to Eugene Investment & Securities analyst Lee Seung-woo. Sales of TVs and PCs also fell significantly compared to the first quarter as people spent less on pricey IT products.

South Korea’s chip stockpiles jumped more than 50% in May, according to the national statistics office, signaling sluggish consumer demand is directly impacting the memory chip industry. Samsung and compatriot SK Hynix Inc. are two of the leading trio of memory makers supplying the world’s data centers and electronics makers. Both have seen their share prices slump by over 20% this year as worries over a potential recession grow.

Samsung warned of an “immense” challenge over its business outlook during its last earnings call as global macro risks like inflation and the Russia-Ukraine war threatened ripple effects. Consumers and enterprise clients are cutting their spending to hunker down before a potential recession, while rising interest rates and costs are directly hitting their disposable income.

Micron’s weak target for the current quarter, a 17% sequential sales drop, may imply Samsung could also have weak sales targets for both DRAM and NAND chips in 3Q22. DRAM-bit demand growth may not achieve 15-20% in 2022 due to weakening demand for PCs and smartphones. NAND-bit growth may not reach the high 20s.