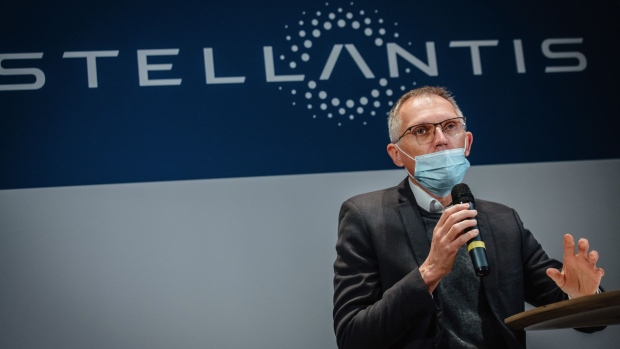 Samsung’s first US battery plant will have annual output of about 23 gigawatt hours when it opens in 2025 and eventually will raise that to 33 gigawatt hours, the companies said Tuesday. The project will create 1,400 new jobs in and around Kokomo, which already is home to Stellantis engine and transmission plants. The city is roughly halfway between the automaker’s vehicle-assembly plants in Illinois and Ohio.

Competition among battery makers to ramp up capacity is intensifying in North America as auto manufacturers including General Motors Co. and Ford Motor Co. electrify their fleets and President Joe Biden looks to encourage the technological shift.

Stellantis Chief Executive Officer Carlos Tavares is racing to transform the sprawling manufacturer after it was formed in the mega-merger between Fiat Chrysler and PSA Group last year. As part of its electrification plan, Stellantis is developing five large battery factories across North America and Europe to produce 400 gigawatt hours of capacity by 2030.

Stellantis already employs about 7,000 people at its engine, transmission, and casting plants in Indiana, including 6,300 members of the United Automobile Workers union, according to the company. The automaker said it will respect the right of its future hourly workers to form a union at the battery plant.

“Those future employees have the right to decide their representational status through secret ballot elections,” spokeswoman Jodi Tinson said in an email.

Cindy Estrada, director of the union’s Stellantis department, said in a statement that the UAW looks forward to reaching an agreement that “brings this new plant under our master agreement with traditional wages and benefits.”

Stellantis and Samsung initially agreed to form a joint venture to build a US battery plant last October. Samsung owns 51% of the venture while Stellantis owns 49%, and their investment in the Indiana plant could eventually reach $3.1 billion.

Stellantis, the owner of the Jeep, Peugeot and Ram brands, has pledged to sell 5 million battery-electric vehicles by the end of 2030. It aims to make all of its European passenger car sales fully electric by that time, as well to make half of its North American car and truck sales either plug-in hybrids or fully battery powered.