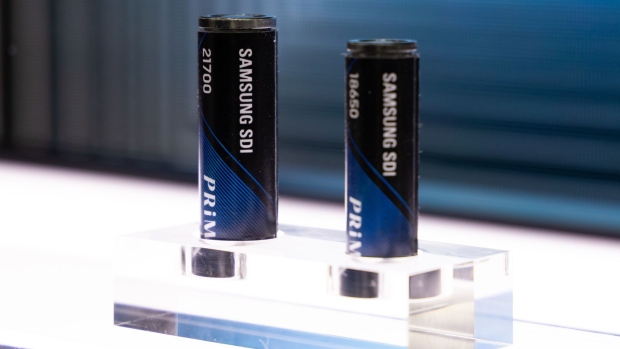 Samsung SDI Co. batteries displayed at the InterBattery exhibition in Seoul, South Korea, on Thursday, March 17, 2022. The exhibiton will run through March 19. , Bloomberg

The company will spend 1.7 trillion won ($1.3 billion) on the plant, which will produce so-called 21700 batteries, referring to a 21-millimeter-wide and 70-millimeter-long cell, to “respond to increasing demand for cylinder-type batteries,” it said in a statement Thursday. Mass production will start in 2024.

The new plant will be a “starting point” for Samsung SDI to become a leader in the global battery market by 2030, Chief Executive Officer Yoonho Choi said at a groundbreaking ceremony in Seremban, according to the statement. Samsung’s investment will create more jobs and opportunities for local companies, Negeri Sembilan Chief Minister Aminuddin Harun said.

Samsung SDI, which supplies batteries to BMW AG and Volkswagen AG, had a 5% share of the global battery market this year through June. That ranks it sixth behind market leader Contemporary Amperex Technology Co. Ltd. with 34% and LG Energy Solution Ltd. at 14%, according to Seoul-based SNE Research.

In May, Samsung SDI announced plans to build its first US battery plant, a $2.5 billion factory in Indiana, in partnership with Stellantis NV.