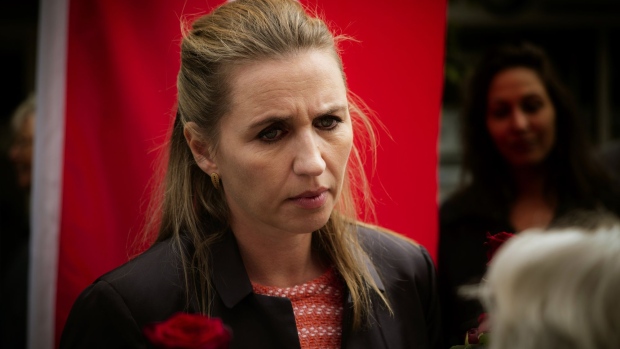 Members wearing protective masks exercise inside a 24 Hour Fitness facility in San Francisco, California, U.S., on Tuesday, Aug. 3, 2021. San Francisco and its surrounding counties are reinstating mask requirements in indoor public spaces for all individuals, regardless of vaccination status, after a surge in Covid-19 cases in recent weeks. , Bloomberg

(Bloomberg) -- San Francisco removed an indoor mask mandate for offices and gyms, provided people prove they are up to date on vaccinations and boosters, starting Feb. 1. Oklahoma hit record hospitalizations, as U.S. infections trend downward and fatalities trend up.

Pfizer Inc.’s Covid-19 pill received backing from the European Union’s drugs regulator, offering a tool to manage infections at home and ease the burden on hospitals.

Denmark said the virus is no longer a threat to society. Germany’s cases surged still higher, with the country’s health minister expecting a peak in mid-February. Some supermarkets and train operators in England will continue to ask people to wear masks even after curbs have been dropped, The Times reported.

The Biden administration said it recommended changes to China’s requirements for Covid-19 quarantine and testing among American diplomats, adding to tensions between the world’s biggest economies ahead of the Olympics.

“We have long-standing concerns regarding the PRC’s quarantine and testing policies that run counter to diplomatic privileges and immunities,” State Department spokesman Ned Price told reporters on Thursday, referring to China’s formal name.

The remarks followed a report by CNN saying that officials at the U.S. embassy in Beijing formally asked the State Department to allow American diplomats to leave the country after some diplomats expressed concern over China’s increasingly strict Covid-19 restrictions.

Southwest Airlines Co.’s chief executive officer is weighing in again on measures to stop the spread of coronavirus -- and this time he’s firmly in the pro-mask camp as carriers struggle to cope with the omicron variant’s impact.

CEO Gary Kelly said on the airline’s quarterly conference call Thursday that now would not be the best time to lift a federal requirement for masks to be worn at all times on aircraft and in airports -- unless a person is eating or drinking. The mandate, which covers all transportation networks across the U.S., is set to expire March 18.

Kelly’s comment follows his controversial remarks during a U.S. Senate committee hearing in December that masks didn’t add much, “if anything,” to fight the virus on airplanes. Kelly himself came down with Covid-19 days later.

Elon Musk voiced his support for a so-called “freedom convoy” of Canadian truckers and other activists on their way to Ottawa to protest Canada’s vaccine mandates and other Covid-19 control measures.

“Canadian truckers rule,” the Tesla Inc. chief executive officer said Thursday in a tweet, a clear nod to a convoy that’s been picking up attention around the world. The truckers have drawn the praise of Donald Trump Jr. and been featured on Fox News in the U.S.

It’s unclear how many trucks will actually make it to the Canadian capital for the weekend protest, with the convoy slowed by winter weather conditions in Northern Ontario. Police reports from along its path suggest the number is much lower than supporters’ claims of thousands of vehicles en route.

San Francisco removed an indoor mask mandate for offices and gyms, provided people prove they are up to date on vaccinations and boosters, starting Feb. 1. The city also changed its rules to allow attendees of indoor “mega events” of 500 people or more to show a negative Covid test as an alternative to proof of vaccination.

San Francisco virus cases are “still high but rapidly dropping,” and its relatively high vaccination rate means some restrictions can be eased, the Department of Public Health said in a statement. More than 90% of eligible residents have had at least one vaccine dose.

Finland eased some restrictions intended to stop overcrowding of health care after witnessing a decline in hospitalizations caused by the coronavirus.

The government is opening up some cultural venues, such as theaters and cinemas, and some sporting facilities including gyms and swimming pools, and expanding the opening hours of restaurants, Hanna Sarkkinen, minister for social affairs and health, told reporters on Thursday.

With the omicron variant raging, Oklahoma reported a record number of hospitalizations Thursday, tallying a three-day average of 2,070 patients, the Oklahoman newspaper reported. The state’s prior record was a single-day total of 1,994 in January 2021, the newspaper reported.

U.S. hospitals face a critical shortage of blood supplies, adding to the pressure on the health-care system already strained by surging Covid-19 cases.

“The need for blood has increased while staffing shortages and high rates of Covid-19 in communities have diminished donations,” the groups said. They said people shouldn’t be discouraged from donating if they can’t get appointments right away because the need is ongoing.

A third dose of mRNA Covid-19 vaccine provided more protection against hospitalization during the rise of the delta variant compared with two shots, according to a U.S. government study.

Vaccine efficacy for adults who received a booster dose made by Moderna Inc. or partners Pfizer Inc.-BioNTech SE was as high as 88% for those with weakened immune systems and 97% for those without such conditions, according to a U.S. Centers for Disease Control and Prevention analysis. After just two doses, the vaccines were 69% effective in immunocompromised people and 82% effective in otherwise healthy recipients, according to the data which analyzed almost 3,000 hospitalized adults.

The results were gathered between Aug. 19 and Dec. 15, when delta was still dominant in the U.S., and efficacy against omicron is likely to be lower, the researchers said. Studies have shown that three doses of mRNA vaccine give better protection than just two against severe disease caused by omicron.

Booster vaccines are a strong shield against Covid-19 hospitalizations and deaths due to the omicron variant, the latest data out of the U.K. showed.

Protection against death with omicron was about 60% roughly six months after a second dose of any Covid vaccine, a figure that soared to 95% two weeks after a booster, the U.K. Health Security Agency said on Thursday. The results mirrored what’s been seen in large studies out of the U.S.

Vaccines were also able to keep infected people out of the hospital, even months after a booster dose. The Pfizer Inc.-BioNTech SE vaccine showed about 75% effectiveness against hospitalization by 10-14 weeks after a booster dose, the U.K. agency said. Up to nine weeks after a Moderna Inc. booster, vaccine effectiveness against hospitalization was 90% to 95%. These figures may change with time, the agency said.

Greece will start to ease some restrictions such as allowing music to be played in bars and restaurants and extending their opening hours, Health Minister Athanasios Plevris said Thursday. Customers must still remain seated.

While pressures remain on the country’s health service, there is a balance between the number of people being hospitalized with Covid-19 and those released after recovering, he said. The length of time spent in the hospital is also less for patients with the now dominant omicron variant than for the delta variant, he said.

Women who had received at least one dose during their pregnancy and who gave birth between January and October last year, were more likely to see no adverse outcomes at birth, compared to their unvaccinated counterparts, according to the latest research published by the U.K. Health and Security Agency. The difference was most observable for those 30 or above.

Previous studies showed unvaccinated women have a higher risk of developing severe illness from Covid-19. Vaccination rates for pregnant women have almost doubled between August and October, but remain low compared to uptake in the general population in the same age group.

The European Medicines Agency’s expert committee recommended granting a conditional marketing authorization for the antiviral, called Paxlovid, for adults with Covid at risk of developing severe illness. The agency said in December that the treatment could be used by adults, in advance of formal approval.

The United Arab Emirates is back at the top of Bloomberg’s ranking of best places to be in the pandemic. Its success is based on an approach it has been following for months: a combination of almost full vaccination coupled with consistent openness to travel, alongside what has been a smaller omicron outbreak compared with elsewhere.

Ruling out a return to full lockdown, the UAE economy is poised for strong economic growth this year helped by the rebound in oil prices.

Denmark will end virus restrictions next week and reclassify Covid-19 as a disease that no longer poses a threat to society, even as infections hit a record high. The decision echoes an idea that it’s time to start thinking about Covid as endemic rather than a pandemic.

The easing of curbs also echoes recent moves elsewhere in Europe -- including Ireland and the U.K. -- to scale back restrictions amid signs that omicron is less dangerous than earlier variants of the virus.

Israel will offer a fourth dose of vaccine to adults who have pre-existing medical conditions, are at risk for severe illness, or have “significant exposure” to infection due to their jobs. Until now, only those age 60 and older were eligible for a fourth shot.

Sainsbury’s, Waitrose and John Lewis are among shops where customers in England will still be asked to wear masks even as curbs were lifted, The Times reports. People on London’s public transport network will still be required to wear face coverings, with mayor Sadiq Khan calling on people to “do the right thing.”

Germany reported more than 200,000 new infections in one day for the first time, with Health Minister Karl Lauterbach expecting the latest wave to peak in mid-February. For the time being, hospitals are not coming under the same pressure as in previous waves.