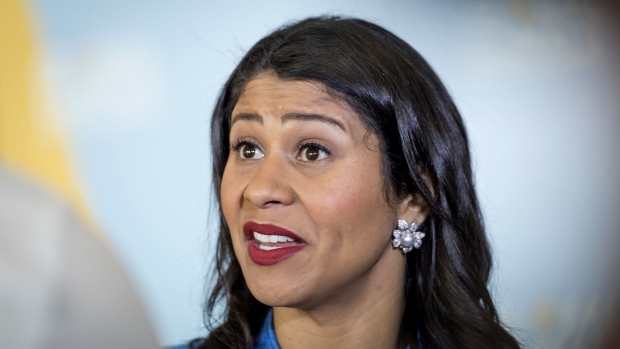 London Breed, mayor of San Francisco, speaks during an interview at the Global Climate Action Summit in San Francisco, California, U.S., on Thursday, Sept. 13, 2018. The event brings together industry and political leaders working on improving the conditions and concerns facing climate in the world today. , Bloomberg

(Bloomberg) -- San Francisco Mayor London Breed on Friday proposed a budget that fills a $1.5 billion shortfall through June 2022 by drawing down reserves and asking employee unions to defer wage increases or risk layoffs.

In June, Breed presented an interim budget that allowed essential spending to continue while her administration grappled with resolving the deficits triggered by the coronavirus pandemic. She must sign a budget approved by the board of supervisors by Oct. 1.

“The public health and economic impacts of the COVID-19 crisis on our communities were not only unexpected, but stark and immediate,” Breed said in a letter accompanying her blueprint. “When crafting this budget, it was a priority that it be balanced responsibly with a focus on preserving jobs and critical services, while also recognizing the significant challenges that still lie ahead for San Francisco.”

San Francisco, at the epicenter of the nation’s technology industry, hasn’t been immune to the unprecedented crisis that may result in more than $360 billion in revenue shortfalls for cities nationwide over the next three years, according to the National League of Cities. San Francisco expects its gap to hit around $3.6 billion over the next four years, and the city’s fiscal analysts warn that it may grow depending on future outbreaks and the economic recovery.

With restaurants and stores shuttered and hotels vacant, the city expects about an 8% drop in revenue for this year ending in June 2021, with the biggest declines in business, lodging and transfer taxes. The general fund this year is $6.2 billion.