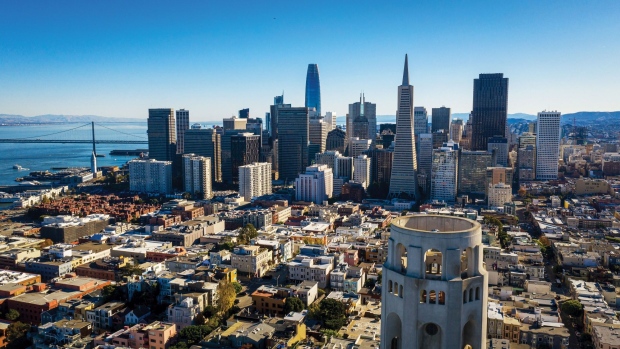 Highrise buildings in the Financial District of San Francisco, California, U.S., on Friday, Nov. 27, 2020. California reported 15,614 new cases, pushing the 14-day average to a record on Sunday. The total number of infections in the state now stands at almost 1.2 million. , Bloomberg

The city’s office-vacancy rate reached 25.5% at the end of September, up from 20% a year earlier, according to real estate brokerage CBRE Group Inc. At the start of the pandemic, it was around 4%.

Tech companies, including Salesforce Inc., whose namesake tower is the city’s tallest, have been paring space amid hiring cutbacks and remote-work demands. Office leasing in the third quarter was the lowest in two years, according to the San Francisco Chronicle, which reported the data earlier.

Workers have been slow to return to the city’s downtown, with weekly office utilization less than 40% of the pre-pandemic average, according to security company Kastle Systems. Office values in the San Francisco area have tumbled almost 40% on a price-per-square-foot basis from a high in December 2020, according to MSCI Real Assets.

The decline in office demand is part of a broader slowdown in San Francisco’s economy, with home prices falling, employment declining and tourism slow to rebound. The city stands to have more pain as Bay Area tech companies slow hiring or lay off workers.