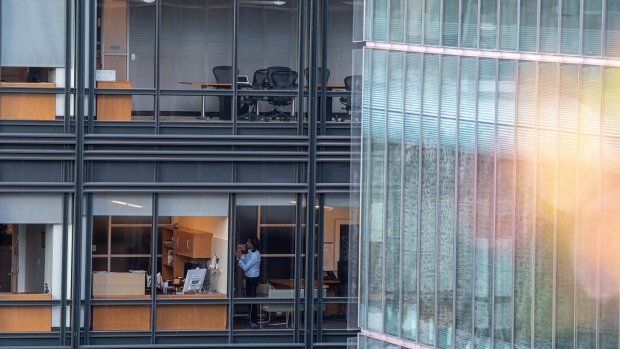 A person works in an office building in San Francisco, California, U.S., on Wednesday, June 9, 2021. California officials plan to fully reopen the economy on June 15, if the pandemic continues to abate, after driving down coronavirus case loads in the most populous U.S. state. Photographer: David Paul Morris/Bloomberg , Bloomberg

(Bloomberg) -- Return-to-office efforts are accelerating across the U.S., but San Francisco is still lagging far behind, according to Boston Properties Inc.’s chief executive officer.

The share of people back at their desks in the company’s San Francisco buildings is lower than in other cities where it owns properties, such as New York, Washington and Boston, Owen Thomas said in a Bloomberg Television interview.

Major technology firms in the Bay Area have delayed their return until next year, while New York finance companies have been quicker to bring workers back. Still, leasing of high-quality offices is picking up in both San Francisco and New York, according to Thomas.

“We have been leasing quite a bit of space, high-quality floors with views in San Francisco, without a pandemic discount,” he said. “In New York, we’ve been leasing a lot of space. I’d say there has been some reduction in the rents and the economics of the leases we have been doing in New York because of the pandemic.”