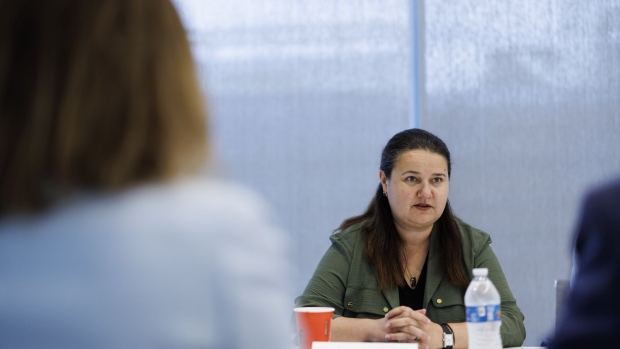 Oksana Markarova speaks during an interview in Washington, D.C., on Aug. 11. , Bloomberg

President Volodymyr Zelenskiy’s government wants the US to add a couple of banks per week to its list of sanctioned financial institutions, according to Ambassador Oksana Markarova, adding that she’s conveyed the request to the Treasury Department.

“Sanctions are as important as weapons,” Markarova, a former finance minister, said Thursday in an interview in Bloomberg’s Washington office.

Markarova said that outs of more than 300 Russian banks, only a dozen have been put on the full blocking sanctions, which broadly prohibit US persons from transactions with them.

A Biden administration official said that the U.S. has sanctioned 80% of total banking assets in Russia, including its 10 largest banks, and has blocked transactions with Russia’s central bank.

The US, UK, European Union and others have been piling sanctions on Russia’s business and political spheres since its late February invasion of Ukraine, including on its largest financial institution, Sberbank PJSC, as well as hundreds of individuals including Putin and Foreign Minister Sergei Lavrov.

Any Russian bank is a legitimate sanctions target, she said, as they are all effectively involved in financing Putin’s campaign.

“As soon as one bank is sanctioned, some other private bank suddenly becomes a financier of the industry or military,” she said, adding that she’s also pushing for the State Department to designate Russia as a state sponsor of terrorism.

While a couple of banks could be spared for certain purposes, “everything else should be sanctioned, because all of them are engaged in financing their terror machine that is conducting war,” she said.

Asked for comment, a Treasury Department spokesman said that it doesn’t preview or predict future sanctions.