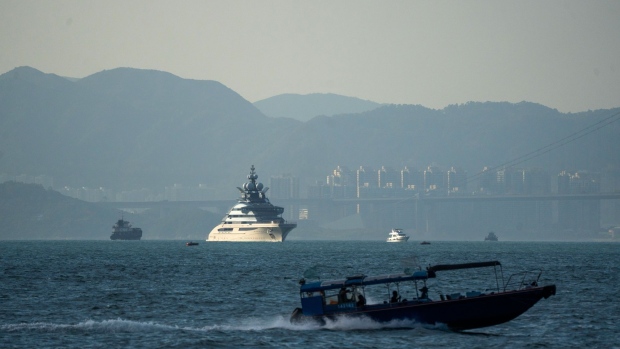 The Nord 465-foot superyacht in Hong Kong, China, on Thursday, Oct. 6, 2022. The Nord, a $500 million megayacht that's connected to sanctioned Russian tycoon Alexey Mordashov, has mysteriously ended up in Hong Kong after a more than week-long voyage from the port of Vladivostok where it was anchored since March. , Bloomberg

(Bloomberg) -- A $500 million megayacht that’s connected to sanctioned Russian tycoon Alexey Mordashov has mysteriously ended up in Hong Kong after a more than week-long voyage from the port of Vladivostok where it was last anchored.

It had been docked there since March after stops in the Maldives and Seychelles over the northern hemisphere winter. The 465-foot Nord -- longer than the length of an American football field -- left the Seychelles on March 12, was parked briefly in Sri Lanka and arrived in Vladivostok later that month.

Mordashov, the largest shareholder in steelmaker Severstal PJSC and Russia’s third-richest man, then kept his Nord anchored in Russian ports until its departure last week, data compiled by Bloomberg show.

Mordashov was sanctioned by the European Union, the UK and the US following Russia’s invasion of Ukraine in February. In May, he joined a growing list of well-known Russian businessmen trying to fight the sanctions imposed on him by the EU.

A spokesperson for Mordashov said that he’s currently in Moscow and declined to comment on the yacht’s movements.

More than a dozen yachts connected to sanctioned Russian businessmen and worth more than $2.25 billion have been seized by US and European governments to punish them for their close ties to Russian President Vladimir Putin. Other megayachts have been immobilized in ports or naval yards across Europe in the aftermath of the invasion as authorities attempt to prevent ships from relocating to ports where sanctions don’t apply.

Some megayachts fled to Russia, Turkey and a few other friendly havens. The US has formed a taskforce dubbed KleptoCapture to pursue the assets of Russian oligarchs. The unit, along with the FBI and other agencies, sent agents to Fiji to seize the $325 million Amadea that the US said belonged to Russian billionaire Suleiman Kerimov.

Read: US Sails Seized Russian Yacht to California From Fiji

The seizure resulted in a drawn out legal battle in Fiji that ended in a big win for the US after a Fiji court allowed the US to seize the ship. US authorities hired a new crew and sailed the yacht to a port in Southern California in late June.

The Nord, which features two helipads, a cinema and 20 luxury cabins, departed Vladivostok on Sept. 27 and listed the Vietnamese port of Da Nang as its destination. A few days later it changed its destination to Hong Kong, where it anchored Wednesday evening, according to vessel location data compiled by Bloomberg.

The ship had also changed its flag -- the maritime authority under which the vessel is registered -- to Russia from the Cayman Islands in June, according to Marine Traffic. It’s now anchored in Hong Kong harbor.

The Nord appears to be safe in Hong Kong, for now.

“Certain countries may impose unilateral sanctions against certain places on the basis of their own considerations,” the Marine Department said.