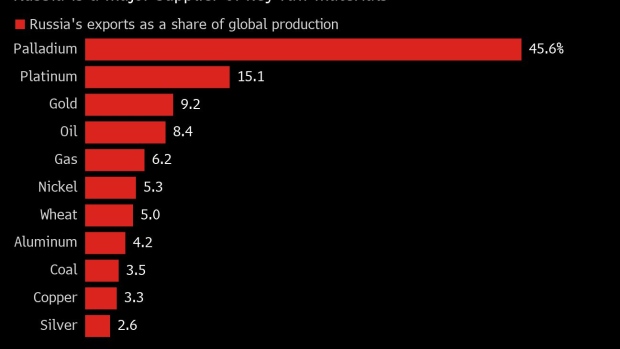 (Bloomberg) -- Russia’s economy has been dealt a severe blow by international sanctions imposed following the invasion of Ukraine and that damage will become increasingly clear, according to Germany’s vice chancellor.

The revenue Russia receives from commodities like oil and gas is “painful,” Robert Habeck, who is also the economy minister, said Thursday in a speech to parliament. But that doesn’t accurately reflect the pressure President Vladimir Putin is under because the country can “barely spend any of it,” he said.

Habeck said that a shortage of software security updates for aircraft will soon lead to planes being grounded while a lack of high-tech equipment will “lead to production processes being destroyed.”

Even with Germany and other countries halting or phasing out Russian energy imports, Moscow’s oil-and-gas revenue will be about $285 billion this year, up by more than a fifth compared with 2021, according to estimates from Bloomberg Economics based on Economy Ministry projections. Including other commodities, it more than makes up for the $300 billion in foreign reserves frozen by sanctions.

With the war in Ukraine now into a fourth month, there is little evidence that sanctions are forcing Putin to abandon his military campaign.

“We’re not doing this for fun,” Habeck told lawmakers. “We’re doing it to hurt Putin’s economy and make our economic policy contribution to bringing an end to this war at some point. We’re looking to cut the Russian economy to the quick.”