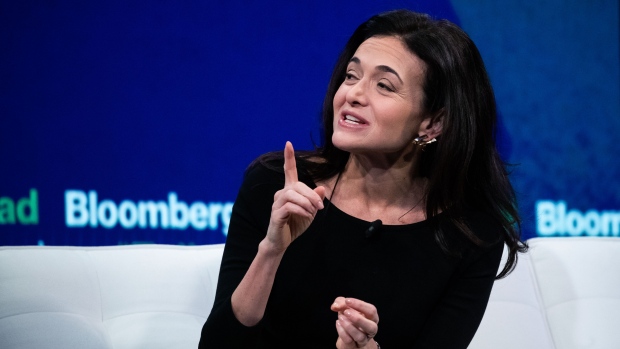 The social-media company faced intense criticism after Russian state-backed actors manipulated voters during the 2016 campaign. Next year will be “a massive test for us,” Sandberg said Thursday at Bloomberg’s The Year Ahead conference in New York.

In a wide ranging discussion, Sandberg touched on other big themes for 2020, including antitrust investigations and political ads.

Facebook has been under pressure in recent weeks for its position of not fact-checking ads from politicians. Chief Executive Officer Mark Zuckerberg has vigorously defended the company’s stance even as Twitter Inc. moved to ban all such ads. Within Facebook, employees are also concerned. Hundreds of staffers recently signed a letter to company executives asking the company to change the policy.

Facebook is debating some of the points in the letter, and is especially considering revising the design of such ads to make their political nature more obvious, according to a person familiar with the matter. CNN reported Thursday that Facebook is considering changes to how political ads can be targeted, how they are labeled and whether to provide more information about who is paying for an ad.

Sandberg emphasized that Facebook’s ad library already provides transparency on who is paying for advertisements. “That’s basically the Honest Ads Act,” Sandberg said, referring to legislation introduced by Senator Amy Klobuchar calling for increased disclosures on funding for online ads, similar to rules for television ads. Sandberg said that while she doesn’t think such legislation will ever pass, “we built it anyway.”

Facebook is also facing antitrust investigations from the Justice Department and Federal Trade Commission and amid calls for the company, and other internet giants, to be broken up.

“The anticompetitive narrative is one that people are focused on,” Sandberg said. “The real concern is about the size and power of tech companies.”

But Sandberg argued against the idea of big tech companies causing consumer harm, pointing out that Facebook’s offerings were free, and that consumers had many choices for social media, video sharing and messaging sites, ranging from Apple Inc.’s iMessage to Chinese company WeChat, owned by Tencent Holdings Ltd.

The executive said that breaking up the social networking site, which owns Instagram and WhatsApp, would decrease its ability to deal with issues like privacy and election security. She also drew a contrast between the “American values” of U.S. tech companies and government influence over emerging Chinese competitors.

“What comes behind breaking up the U.S. tech companies is not another U.S. tech company,” she said, but a Chinese tech giant. Sandberg noted that the popular Chinese music video app TikTok has notched 1.5 billion downloads in 3 years, meaning it’s growing faster than Facebook ever did.

After acknowledging the many challenges Facebook will face next year, Sandberg struck an optimistic tone. “That’s why 2.8 billion people are using these products,” she said, “because they make their lives better.”