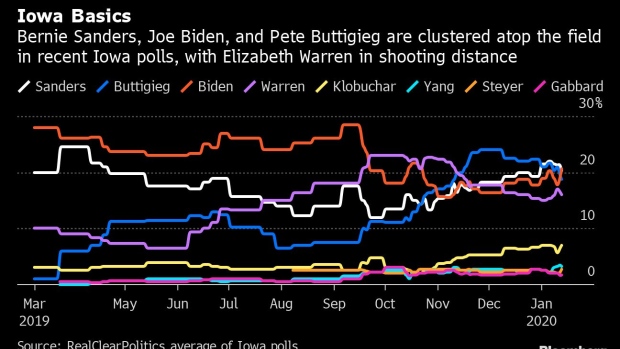 (Bloomberg) -- Joe Biden and Bernie Sanders confronted each other over the use of military force in the Middle East Tuesday, as Democratic candidates for president argued over the Iraq war amid rising tensions in the Middle East.

Senator Sanders called the Iraq war “the worst foreign policy blunder in modern American history” and attacked Biden for voting to authorize it. Biden said the vote in 2002 was a mistake but that as vice president under Barack Obama he would compare his record to anyone else’s.

Sanders opposed the Iraq war but voted in favor of the war in Afghanistan.

The first question in the Des Moines Register/CNN debate tested each candidate on their qualifications as commander-in-chief. That’s been a selling point for Biden, but his past foreign policy positions have come under new scrutiny — from the right and the left — for his support of the wars in Afghanistan and Iraq.

The Democratic candidates have all opposed President Donald Trump’s decision to kill Iranian General Qassem Soleimani this month, saying it threatened to further destabilize the region.

Going into the debate, all eyes were on the two progressive candidates standing on either side of Biden: Sanders and Elizabeth Warren.

The two senators maintained a united front through all six debates last year, but recent squabbles over who should be the standard-bearer for the party’s left flank have tested their alliance.

While the Democratic primary started with the most diverse field of candidates in history, only white candidates made it to Tuesday’s debate stage. Cory Booker dropped out of the race on Monday while Andrew Yang, Tulsi Gabbard and Deval Patrick all missed the polling and fund-raising requirements to qualify for the January debate.

Former New York Mayor Mike Bloomberg is self-funding his presidential campaign so he didn’t meet the donor requirement to participate. Bloomberg is the founder and majority owner of Bloomberg L.P., the parent company of Bloomberg News.

Tuesday’s debate is the last such forum before the Iowa caucuses. It’s particularly important for the senators — Sanders, Warren and Klobuchar — who will have to break away from campaigning as soon as this week to be sworn in as jurors in Trump’s impeachment trial. After that, the trial could require their presence at the Capitol for weeks to come.

To contact the editors responsible for this story: Wendy Benjaminson at wbenjaminson@bloomberg.net, Larry Liebert