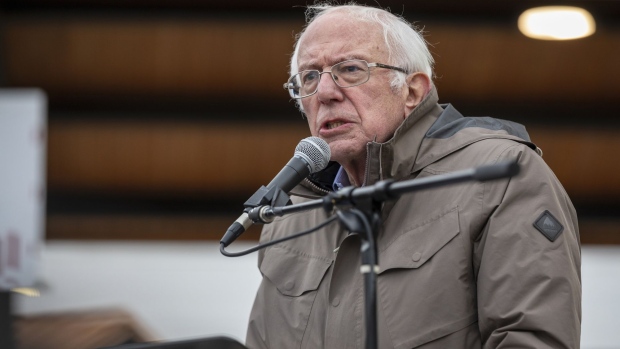 Senator Bernie Sanders, an Independent from Vermont, speaks during a union workers strike against Kellog Co. in Battle Creek, Michigan, U.S., on Friday, Dec. 17, 2021. Sanders rallied with striking Kellogg Co. workers in Michigan on Friday, after Kellogg said last month it was planning to hire replacement workers "where appropriate." , Bloomberg

(Bloomberg) -- Senator Bernie Sanders said it’s time for Democrats to change course on Joe Biden’s agenda and have senators vote on portions of the president’s key economic bill, then seek to pass what remains as a package.

After six months of “so-called negotiating” with Democratic senators Joe Manchin and Kyrsten Sinema, “we need to start voting,” Sanders said on CNN’s “State of the Union” on Sunday. “We need to bring important pieces of legislation that impact the lives of working families right on to the floor of the Senate.”

Biden’s tax-and-spending package, dubbed Build Back Better, only needs 50 votes to pass under reconciliation in the Senate and avoid a Republican filibuster. Negotiations have dragged on over the last year, sinking the president and his party’s approval ratings as Manchin and Sinema hold out on key portions of the bill.

Sanders argued for forcing senators of both parties to take a stand on portions of the bill that are popular among broad swaths of Americans such as negotiating the cost of prescription drugs, which has attracted bipartisan interest.

“I have the feeling that we will be able to get 50 votes or more on some of these issues,” said Sanders, a Vermont Independent who caucuses with Democrats. “We could put that piece together and then pass something that’s very significant.”

Biden said Wednesday that his $2 trillion economic agenda will probably have to be broken up so that a scaled-back version can pass Congress in the face of resistance in his own party.

“And if the Republicans want to vote against lowering the cost of prescription drugs, climate change, whatever it may be, and if the Democrats -- two Democrats -- want to join them, let the American people see what’s happening and then we can pick up the pieces and pass legislation,” Sanders said.