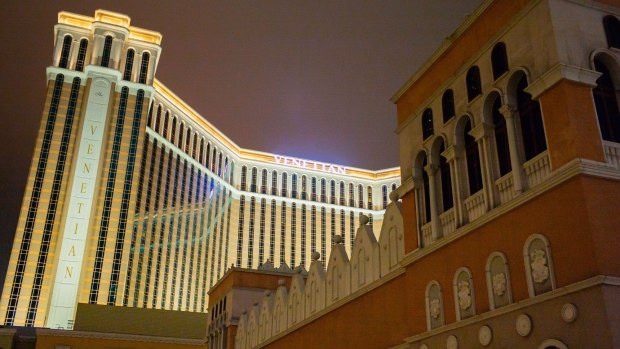 The Venetian Macao resort and casino, operated by Sands China Ltd., a unit of Las Vegas Sands Corp., left, stands illuminated at night in Macau, China, on Tuesday, March 3, 2020. Casinos in Macau, the Chinese territory that's the world’s biggest gambling hub, reported a record drop in gaming revenue, as they grappled with the cost of closing down their businesses for 15 days to help contain the deadly coronavirus outbreak. Photographer: Billy H.C. Kwok/Bloomberg ,

(Bloomberg) -- Las Vegas Sands Corp. will invest at least $3.8 billion in new facilities in Macau over the next ten years as part of the renewal of its concession to operate casinos in the market.

About 92% of the planned spending will be in non-casino attractions, including meeting space, entertainment facilities and a new garden attraction, Sands said in a presentation to investors Wednesday.

The total investment, which doesn’t include approximately $1.1 billion in operating expenses, could be higher, according to Sands Chief Executive Officer Rob Goldstein.

“We have a very strong future ahead of us in Macau,” Goldstein said. “If you’re looking for a negative comment on the Macau market, you’re on the wrong earnings call.”

Sands and other casino operators renewed their licenses to operate in Macau last year. The renewals included commitments to invest in the region, especially in non-casino attractions as authorities look to expand the tourism beyond hardcore gamblers.

Macau had been the largest casino market in the world for a number of years, but faced challenges recently due to pandemic-related restrictions in travel.

Sands, which sold its Venetian casino complex in Las Vegas last year, reported sales that were better than last year, but fell just shy of analysts’ projections. Shares gained as much as 6.5% in late trading after the report.