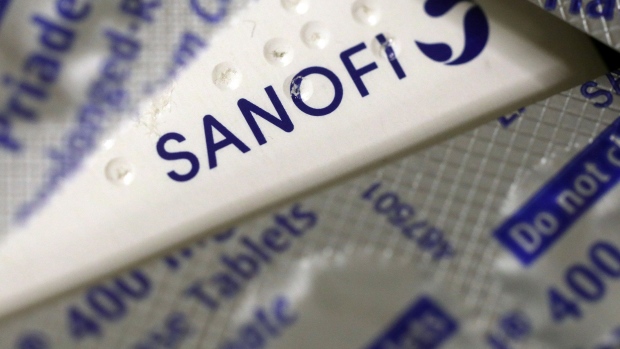 Blister packs containing Priadel tablets, produced by Sanofi, sit on a pharmacy counter in this arranged photograph in London, U.K., on Thursday, Dec. 29, 2016. The rapid pace of innovation among drugmakers may continue to be overshadowed by broader investment themes, such as the switch away from defensive stocks into more cyclical industries, during 2017, according to Bloomberg Intelligence. Photographer: Chris Ratcliffe/Bloomberg , Photographer: Chris Ratcliffe/Bloomberg

Sanofi is holding discussions over options for its consumer-health business that could be worth $30 billion as new Chief Executive Officer Paul Hudson seeks to rejuvenate the French drugmaker, people familiar with the matter said.

While the pharma giant has made no decisions, it has been talking to financial advisers to gauge shareholder feedback, according to the people, who asked not to be identified because the deliberations are private. Hudson, who has said he will take a critical look at all of Sanofi’s operations, will give a strategy update on Dec. 10.

Sanofi shares rose as much as 1.5% in Paris, reversing an earlier decline.

A review of the business that owns Allegra allergy tablets, Rolaids antacids and Dulcolax laxatives could lead to deals including a spinoff or merger -- an approach several rivals have already pursued with their consumer-health units. Such a move could help Sanofi focus on fast-growing areas such as cancer and gene therapy.

Sanofi could also decide to hang onto the unit, the people said. That would help the company deal with another potential challenge -- global pressure on drug prices -- by keeping its revenue stream more diversified.

All businesses are undergoing thorough reviews at the moment, according to the Paris-based company. The consumer-health unit generated more than $5 billion in revenue last year. It competes with a similar division at Bayer AG, which doubled down in the field when it bought Merck & Co.’s over-the-counter operations in 2014, gaining brands such as Claritin.

Both Novartis AG and GlaxoSmithKline Plc have recently narrowed their focus on cutting-edge prescription drugs.

Led by CEO Emma Walmsley, Glaxo pooled its consumer assets with those of Pfizer Inc., paving the way for a split into two companies, one focused on pharma and vaccines and the other dedicated to over-the-counter brands. Novartis’s Vas Narasimhan spun off the drugmaker’s Alcon eye-care division and ditched a stake in a consumer-health venture as it bets on targeted products like a gene therapy for a rare but devastating muscle disease.

Hudson, a former executive at Novartis and AstraZeneca Plc, is also grappling with questions about the future of Sanofi’s diabetes unit, along with its pipeline priorities and acquisition plans. He’s weighing the options with new head of research (and former Roche Holding AG executive) John Reed as well as Chief Financial Officer Jean-Baptiste Chasseloup de Chatillon, who held the same job at PSA Group, the French manufacturer of Peugeot cars, before joining Sanofi last year.

Hudson has said he plans to shed light on his strategy at next month’s event outside Boston.

A spinoff of the consumer-health unit could unlock as much as 8 euros per share of “trapped value,” Morgan Stanley analysts including Mark Purcell wrote in a September report. Hudson and his team can draw inspiration from strategic transformations at Novartis and AstraZeneca, as well as efforts to spur innovation at Roche and control costs at Peugeot, they wrote.

Sanofi shares have climbed about 10% since Hudson was named CEO in June, closing at 82.88 euros on Wednesday. The stock had fallen about 16% over the previous four years.

A consumer business spinoff would send a positive signal about Sanofi’s ability to generate a new crop of prescription drugs, said Daniel Mahony, a health-care fund manager with Polar Capital LLP in London.

“That would show confidence,” Mahony said in a telephone interview. A stand-alone over-the-counter business might also be attractive, he said. “When you let it loose, it can invest in itself.”

In prescription treatments, the company could look to accelerate some of its best prospects, while ditching less promising ones -- a process already underway. Sanofi is advancing into the lucrative field of cancer and seeking novel products to reduce its reliance on Dupixent, a standout medicine for severe eczema and asthma.

Hudson and his team are reviewing disease areas “with an eye toward a deeper and much more precise look into our pipeline, into competition and into disruptive science,” the CEO told investors in October. “Fundamental to this will be bolstering our R&D engine.”

--With assistance from John Lauerman.

To contact the editors responsible for this story: Fion Li at fli59@bloomberg.net, Eric Pfanner, Marthe Fourcade