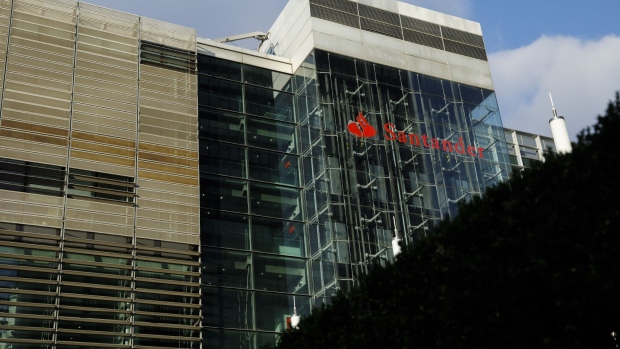 A Banco Santander SA office building in London, U.K., on Friday, Oct. 22, 2021. The leaders of Europe's top banks agree they have a lot riding on the recent surge in consumer prices. Photographer: Luke MacGregor/Bloomberg , Bloomberg

(Bloomberg) -- Santander UK Plc was fined £108 million ($132 million) by the UK financial watchdog over repeated anti-money laundering failures that included a series of missteps over its monitoring of hundreds of millions of pounds of suspicious funds.

The bank had “serious and persistent gaps” in its oversight of business customers over a five year-period through 2017 and failed to shut down an account channeling funds that was being monitored by law enforcement, the Financial Conduct Authority said in a statement on Friday.

Santander fully cooperated with the FCA probe and accepted the watchdog’s findings in exchange for a 30% discount in the penalty.

“Santander’s poor management of their anti-money laundering systems and their inadequate attempts to address the problems created a prolonged and severe risk of money laundering and financial crime,” said Mark Steward, the FCA’s executive director of enforcement and market oversight.

The fine follows efforts by the regulator to act more forcefully against firms that fail to keep a close eye on suspicious funds. The watchdog previously fined HSBC Holdings Plc, Standard Chartered Plc and NatWest Group Plc a combined £431 million for poor management of their AML systems.

“We are very sorry for the historical anti-money laundering related controls issues,” Mike Regnier, Santander UK’s chief executive officer, said in a statement. “We have since made significant changes to address this by overhauling our financial crime technology, systems and processes.”

One business customer’s account saw about £269 million pass through in nearly four years, even though it was only opened on the basis of monthly deposits of £5,000. And when it was suspected that the account was funneling criminal funds, it was not closed.

The owner of the account, which was supposedly for a translation service, started transferring significant sums just months after it was opened. On three occasions, Santander teams concluded that the owner was misrepresenting the true nature of the business, but the bank failed to shut it down.

When law enforcement asked that the account remain open, Santander failed to ensure regular oversight and missed another key moment to shut the account down six months later, the FCA said.

Santander in 2017 decided to implement a comprehensive restructuring of its processes and systems, the FCA said.

Almost a year ago, the FCA fined NatWest for the criminal offense of failing to prevent money laundering, in a case that heard details of hundreds of thousands of pounds being couriered in black garbage bags and branch vaults overflowing with bank notes.

Steward, who is set to leave the FCA in March, has presided over a series of enforcement actions this month including two market abuse penalties.

(Updates with further details throughout)