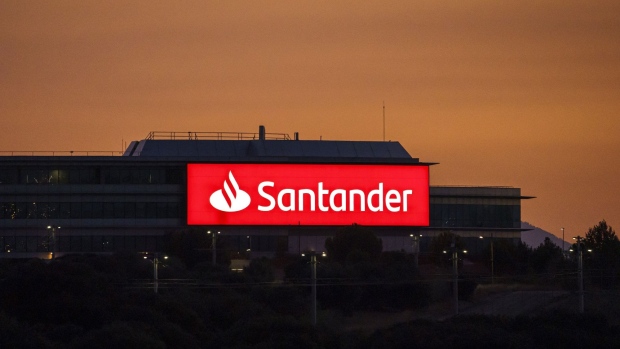 The headquarters of Banco Santander SA stands in Boadilla del Monte, outside Madrid, Spain, on Friday, July 24, 2020. Banks in Italy and Spain, among the most exposed to swings in European sovereign bonds, don’t plan to make use of capital relief intended to soften the impact of potential losses from such debt. Photographer: Paul Hanna/Bloomberg , Bloomberg

(Bloomberg) -- Banco Santander SA pledged to support the goals of the Paris Agreement on climate change and achieve net zero carbon emissions by 2050, including client emissions resulting from its financing, advisory or investment services.

As part of the commitment, Spain’s largest bank will stop providing services by the end of the decade to power generation clients with more than 10% of revenues from thermal coal and will cut all exposure to thermal coal mining, according to a statement Monday.

“Climate change is a global emergency,” said Chairman Ana Botin. “As one of the world’s largest banks, with 148 million customers, we have a responsibility and an opportunity to support the green transition, and encourage more people and businesses to go green.”

Banks are major contributors to global warming via their financing and lending activities, providing the world’s biggest polluters with funding for extraction and drilling. Their role as the money pipeline for the fossil-fuel industry has attracted greater scrutiny from investors and activists in recent years.

Santander joins other banks aligning themselves with the Paris climate goals. Bank of America Corp. pledged earlier this month to achieve net-zero greenhouse-gas emissions, while Morgan Stanley was the first U.S. major bank to announce a net-zero target. Barclays Plc and HSBC Holdings Plc have made similar commitments.

Santander said it aims to raise or “facilitate the mobilization” of 120 billion euros ($145 billion) in green finance by 2025, through channels such as project finance, green bonds and advisory.