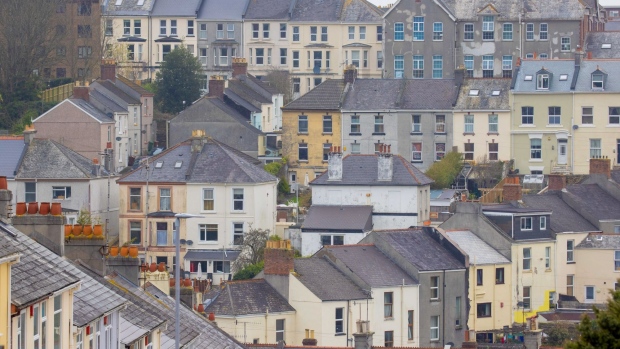 Terraced housing near the site of the Devonport freeport in Plymouth, U.K., on Thursday, March 4, 2021. U.K. Chancellor Rishi Sunak unveiled Devonport among the roster of eight English freeports, low-tariff business zones being created to stimulate trade and investment in the wake of Brexit and the coronavirus crisis. Photographer: Jason Alden/Bloomberg , Bloomberg

Banco Santander SA is seeing the strongest demand for U.K. mortgages in “many, many years,” helping to underpin growth at the Spanish lending behemoth as it positions for higher interest rates globally, Chief Financial Officer Jose Garcia Cantera said.

Lending for mortgages to British individuals climbed 4.4% from a year earlier to 174 billion pounds ($240 billion), Santander said Wednesday when it reported third-quarter earnings. Santander is baking in a rise in U.K. interest rates to 1% by the end of next year into its numbers, Garcia said.

“We’re starting from very low levels of rates and inflation is clearly higher than short term rates are going to be by the end of next year,” he said in an interview with Bloomberg TV. “So we still think mortgage demand will remain very robust.”

As a retail bank with a more than 1.5 trillion euros in assets, Santander will be a clear winner from the global trend for interest rates to increase in key markets from the U.K. to the U.S. and Brazil, Garcia Cantera said.

“Just to give an idea, a parallel move of 100 basis points of the interest rate curve would give us around 1.7 billion euros more revenue,” he said. “It would be very positive for us if interest rates were to go up.”