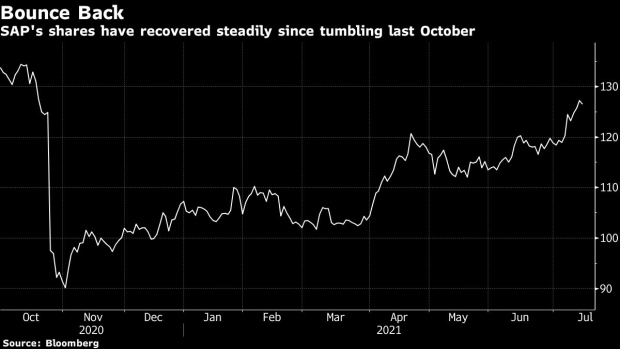 (Bloomberg) -- SAP SE said that its business-travel unit started to see signs of recovery, and the company slightly raised its estimates for full-year cloud sales and profit after its push to get more enterprise customers on its Rise program picked up pace.

The company’s Concur business, which helps users book business travel and suffered during pandemic restrictions, saw “the first signs of recovery” and stabilizing performance in the quarter, Walldorf, Germany-based SAP said in a statement on Wednesday. Still, the business is unlikely to recover to its pre-pandemic levels this year, Chief Executive Officer Christian Klein said in an interview on Bloomberg TV.

Klein’s new initiative, called Rise, helps customers migrate their operations to the cloud to adopt a suite of new products that work faster and cost less to distribute and maintain. SAP has partnered with other software makers to integrate its products, and the company said the program won customers including semiconductor company Advanced Micro Devices Inc. and Etihad Airways since its launch in the first quarter.