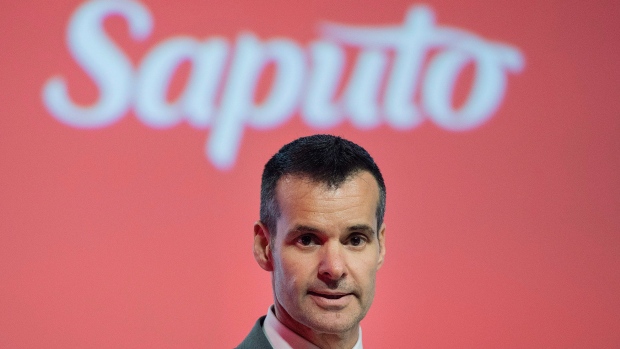 The Montreal-based company's net income fell $22.1 million or 11.9 per cent to $163.1 million for the second quarter ending Sept. 30, 2018. That amounts to 42 cents per share compared to 48 cents per share for the same quarter the previous year.

Analysts surveyed by Thomson Reuters Eikon expected a net profit of about $178.6 million or 44 cents per share.

The earnings "reflect the challenges we anticipated," said Lino Saputo, chief executive officer, during a conference call with analysts Thursday.

Saputo's revenue increased mostly due to the contributions of recent acquisitions, rising about $536 million or 18.6 per cent to $3.42 billion in the quarter.

The company recently announced an agreement to acquire the activities of F&A Dairy Products Inc., a manufacturer of natural cheeses, earlier this month and expects the transaction to close by the end of this year.

Saputo said the manufacturer will continue to make acquisitions and act as a consolidator in the dairy market, pointing to several unnamed acquisition targets that he said would get the company into a new geographical area or give it a new platform somewhere it already operates.

"We're extremely excited about the fact that the pipeline remains full," he said.

Saputo also expressed surprise at some aspects of the new U.S.-Mexico-Canada-Agreement announced about a month ago. The deal will grant an expanded 3.6 per cent market access to the domestic dairy market and eliminate two milk price classes, including the controversial Class 7.

Saputo expected the Class 7 elimination, but was surprised to see the amount of access Canada has granted the U.S. into its market through the USMCA and other trade agreements.