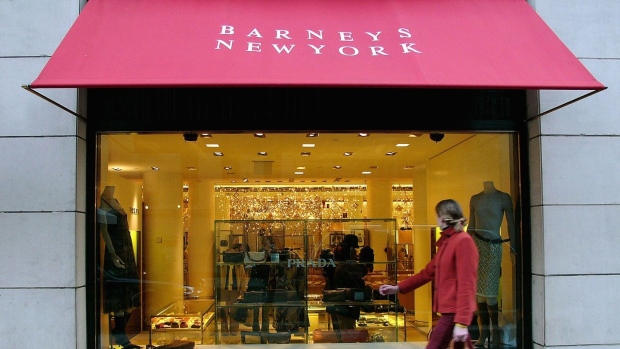 (Bloomberg) -- Sarah Jessica Parker is forever linked to New York City and its luxury shops. In six seasons of HBO’s Sex and the City, her character, Carrie Bradshaw, cherished the gilded halls of Saks Fifth Avenue, Bergdorf Goodman, and Bloomingdale’s, with their pristine shelves and racks filled with Chanel handbags and Prada dresses. But her heart belonged to Barneys, its Madison Avenue flagship heralded as one of the premier couture epicenters of America. (“So what district do you vote in?” someone asks Carrie in the third season. “Whichever one is near Barneys,” she responds.)

Now Barneys New York is bankrupt, and those glory days are long gone. But for Parker, now a shoe-selling businesswoman with two SJP Collection boutiques in the city, it wasn’t just her character that had the love affair with that illustrious department store.

“To me, Barneys was the gold standard,” Parker says backstage at Bloomberg’s The Year Ahead conference, one week after it was announced that the Barneys business would be sold for scraps. “It wasn’t a store that I could afford, but I didn’t mind it. It was like a beacon. Like maybe one day—if you save smart and earned enough...” she stops herself, trying to find the right words to properly eulogize a fading New York cultural icon. “It’s stunning. It’s really shocking.”

In August, Barneys New York, Inc. filed for bankruptcy protection with the hopes that it could find a buyer that would allow it to keep seven stores open, but that didn’t work out. Authentic Brands Group has bought the Barneys name and will license it out to other companies. Its stores will shutter, and the couture goods will be liquidated, sold off inongoing clearance sale with private events for Barneys loyalists. As of Friday, gift cards can no longer be redeemed. The flagship store, once a nine-story titan of high fashion, will remain open for now—albeit in a shrunken state. Remnants of Barneys will cling to life within Saks, which will roll out scaled-down Barneys-branded shops inside some of its locations.

The store’s founder Barney Pressman opened the original shop in 1923 hawking discounted men’s clothing for the salesmen who couldn’t afford the higher realms of tailoring. Parker, who moved to New York from Cincinnati as a kid in the 1970s, remembers when her brothers would get suits for themselves there. The store went upmarket decades later, replacing the dusty overstock merchandise with European designer goods to court Wall Street bankers and businessmen. Her parents, Parker says, would sometimes shop there, but they’d always wait for that annual warehouse sale.

As sad as it is for shoppers, it’s even more trying for designers, says Parker, as the fall of Barneys also closes an important avenue for fashion’s upstarts to get visibility in a crowded industry. Barneys played a role as a gatekeeper to the city’s other department stores and trendy fashion boutiques because it was willing to take chances on new label. (Parker’s show label wasn’t sold at Barneys, but it’s on the shelves and websites of many of its competitors, including Saks, Bergdorf and Bloomingdale’s.)

“It’s been a leader in fashion, and I think it’s really upsetting for a lot of designers who have counted on that relationship to open the door to other retail opportunities,” says Parker.

Despite clearance-tagged items and “Everything must be sold!” signs in Barneys’ windows, Parker doesn’t plan to scurry to the liquidation sale. She has already cashed in her last gift card, given to her years ago. The last item she bought at Barneys was a backpack, although she couldn’t remember the brand.

“There are some really dedicated and devoted Barneys shoppers. I don’t count,” says Parker, “but a moment of silence will be observed.”

To contact the author of this story: Kim Bhasin in New York at kbhasin4@bloomberg.net