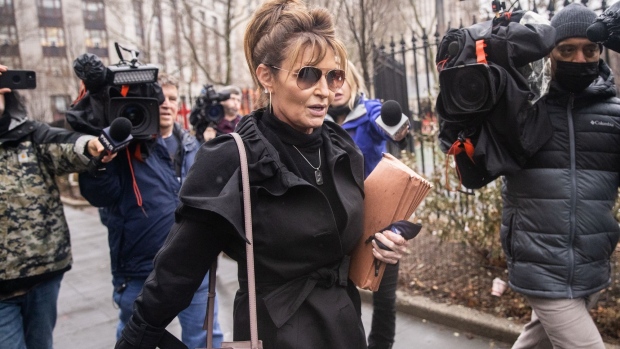 (Bloomberg) -- Former Alaska Governor Sarah Palin is seeking a new trial and a new judge in her defamation suit against the New York Times in the wake of a Bloomberg News story reporting that several jurors deliberating in the case learned from smart-phone push notifications that the judge presiding over the trial had already said he would rule in favor of the newspaper.

U.S. District Judge Jed Rakoff said in a telephone conference Wednesday that lawyers for the former Alaska governor are seeking to file requests for a new trial, to reverse his ruling in favor of the Times, to disqualify himself from the case, to interview the jurors and to disclose any contacts with the media during the trial.

Rakoff told lawyers and spectators on Feb. 14 that he planned to throw out Palin’s suit, regardless of the jury’s verdict, based on the failure of her team to present sufficient evidence to win the case. But he let jurors continue their deliberations to allow a higher court to consider their verdict in an anticipated appeal. They delivered a verdict against Palin the next day.

Palin sued the newspaper and former opinion page editor James Bennet over a 2017 opinion piece incorrectly linking her to a deadly shooting, accusing them of disregarding the truth in order to pursue a biased narrative. The Times and Bennet had argued that they made honest mistakes that they corrected less than a day after publication.