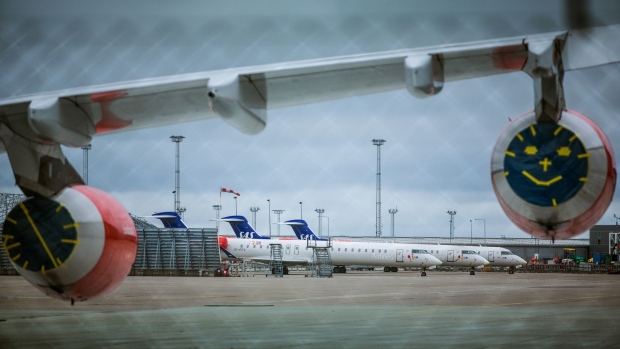 Tape on an engine covering forms a smiling face on on a grounded passenger aircraft, operated by SAS AB, parked on the tarmac at Copenhagen Airport in Copenhagen, Denmark, on Wednesday, April 29, 2020. Scandinavia's biggest network airline, SAS, is eliminating as many as 5,000 jobs, marking the first permanent staff cuts by a major European carrier in the face of collapsing travel demand. Photographer: Carsten Snejbjerg/Bloomberg , Bloomberg

(Bloomberg) -- SAS AB will raise 12 billion kronor ($1.28 billion) to fund the Scandinavian airline’s comeback, in a recapitalization backed by its biggest owners -- the Swedish and Danish governments and the Wallenberg family.

The plan includes share sales, a rights issue and the issue of hybrid notes, as well as the conversion of some 3.75 billion kroner of debt into equity, according to a statement Tuesday.

In all, the moves will restore 14.8 billion in equity, SAS said. The airline has already implemented deep job cuts to counteract the effects of the pandemic. The fund-raising will allow the carrier “to continue as a key provider of important Scandinavian airline infrastructure,” it said.

The governments of Denmark and Sweden already the two largest shareholders, along with No. 3 owner the Knut and Alice Wallenberg Foundation, have agreed to participate in the offerings.