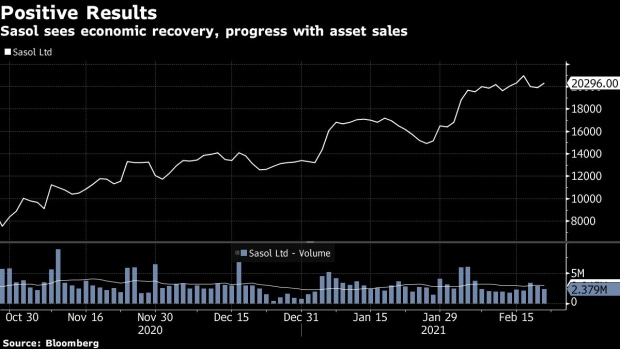 Overhead lighting illuminates pumps on the forecourt of a Sasol Ltd. fuel station in Pretoria, South Africa, on Thursday, June 4, 2020. South Africa’s state-owned Central Energy Fund is considering buying assets that have been put on the block by fuel and chemical maker Sasol Ltd. as it seeks to restore itself to profitability. Photographer: Waldo Swiegers/Bloomberg , Bloomberg

(Bloomberg) -- Sasol Ltd., the South African chemicals and fuel maker, called off a potential $2 billion share sale and announced first-half profit more than tripled. The shares jumped to the highest in a year.

“A decision was made not to pursue a rights issue given the current macroeconomic outlook, and the significant progress made on our response plan initiatives,” Sasol said in a statement Monday. “The balance sheet deleveraging pathway will continue to be prioritized to ensure that we operate within our financial covenants.”

Speculation over a share sale began about a year ago amid fallout from Sasol’s Lake Charles project in Louisiana, oil prices at half their current levels, and Moody’s Investors Service’s decision to cut the company’s credit rating to junk.

The company has been reducing debt through an accelerated sale of assets, most notably by offloading a 50% stake in its base-chemicals business at Lake Charles to LyondellBasell Industries NV for $2 billion. Divestment proceeds have reached $3.3 billion to date.

Total debt was 126.3 billion rand ($8.5 billion) at the end of December, compared with 189.7 billion rand six months earlier. Sasol said macroeconomic volatility may continue to have an impact on its covenant levels.

The company is transitioning to a business model that consists of a global chemicals business and a southern African energy business, designed to “deliver attractive returns” even in a $45-a-barrel oil-price environment. Targets include cost reductions and gross margin improvement.

The board approved a final investment decision on the production sharing agreement for a gas power project in Mozambique.