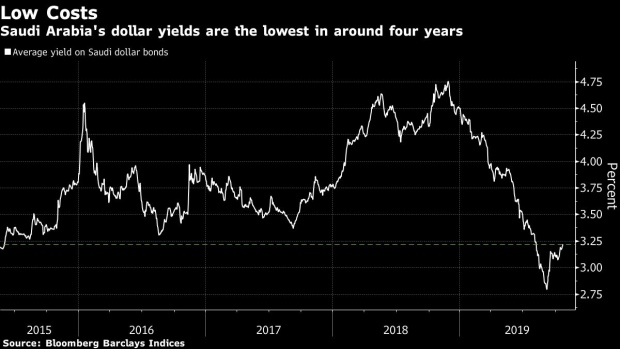 (Bloomberg) -- Saudi Arabia is seeking to raise $2.5 billion of Islamic bonds as the world’s biggest oil exporter takes advantage of borrowing costs that are around the lowest in four years.

The kingdom’s government set initial price guidance for a 10-year sukuk at between 145 basis points and 150 basis points over the benchmark midswap rate, according to a person familiar with the deal, who asked not to be identified because the information is private. Saudi Arabia’s $4 billion of securities due in April 2029 closed at a spread of 125 basis points on Monday, according to data compiled by Bloomberg.

The sale comes just days after oil giant Saudi Aramco delayed an initial public offering by at least a few weeks. That followed last month’s drone and missile strikes on Aramco’s facilities, which briefly halved its output. The kingdom has already raised $10.9 billion of Eurobonds this year, and the new deal will complete it funding requirements on international markets, according to the person.

Emerging-market sovereign borrowers are returning to debt markets as stimulus from major central banks causes a hunt for higher yields among global investors. Saudi Arabia planned to issue about $32 billion in local- and foreign-currency debt this year to fund its budget deficit.

Saudi Arabia is preparing to host international investors next week for its Future Investment Initiative -- an annual jamboree to showcase the kingdom’s aspirations and which has been dubbed Davos in the Desert.