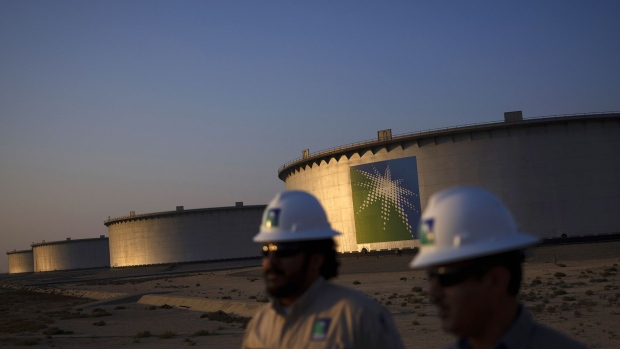 Crude oil storage tanks stand in the Juaymah tank farm at Saudi Aramco's Ras Tanura oil refinery and terminal at Ras Tanura, Saudi Arabia, on Monday, Oct. 1, 2018. Speculation is rising over whether Saudi Arabia will break with decades-old policy by using oil as a political weapon, as it vowed to hit back against any punitive measures after the disappearance of government critic Jamal Khashoggi. , Photographer: Simon Dawson/Bloomberg

(Bloomberg) -- Saudi Arabia’s central bank doubled leverage limits for retail investors looking to buy shares in state oil giant Saudi Aramco, according to people familiar with the matter, part of an effort to boost local demand for what could be the world’s largest initial public offering.

Saudi banks will be permitted to give leverage to retail customers investing in Aramco at a ratio of 2 to 1 for every riyal they put toward buying shares, up from the normal regulatory limit of 1 to 1, the people said, asking not to be identified because the decision isn’t public. Banks are permitted to give corporate and institutional customers higher leverage ratios still based on each customers creditworthiness, the people said.

The Saudi Arabian Monetary Authority, as the kingdom’s central bank is known, didn’t respond to requests to comment.

Saudi Aramco opened book building for it much anticipated IPO on Sunday, pricing its shares at between 30 to 32 riyals. That would give the company a valuation of up to $1.71 trillion at the top end of the range, well below the $2 trillion target sought by Crown Prince Mohammed bin Salman since he first mooted an initial public offering in 2016.

The offering is expected to rely heavily on local demand. Plans to market the deal in the U.S., Canada and Japan were dropped, although foreign investors registered in Saudi Arabia will still be able to buy shares.

--With assistance from Vivian Nereim.

To contact the editors responsible for this story: Stefania Bianchi at sbianchi10@bloomberg.net, Will Kennedy