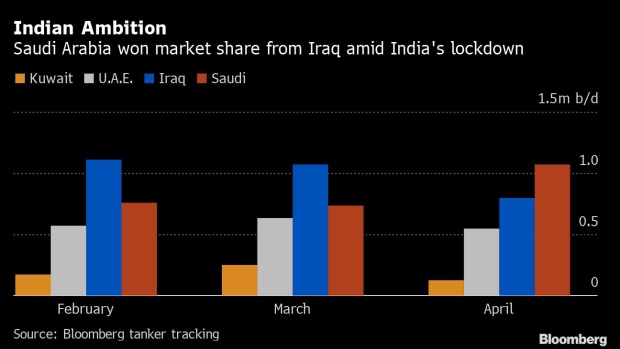 (Bloomberg) -- The uneasy truce that settled over oil markets this month as some of the world’s largest producers began cutting output belies the raging competition among exporters seeking to preserve their share of a diminished market.

Saudi Arabia, the world’s biggest exporter, appears to be winning the fight for sales as it slashes prices for its crude. Producers globally are struggling to retain customers as the coronavirus destroys demand for fuel. After flooding the market in April, producers are now scaling back shipments as part of the deal by OPEC+ suppliers to soak up the glut in oil.

For evidence of where the Saudis have been winning, look no further than last month’s crude exports. Saudi Arabia was the only one of OPEC’s top four producers to boost sales to India in April, according to Bloomberg tanker tracking. The kingdom’s shipments to China doubled, and its exports to the U.S. reached 1 million barrels a day, the most since August 2018.

“The Saudis are doing very well,” said Ahmed Mehdi, a research associate at the Oxford Institute for Energy Studies, referring to the battle for buyers. “Aramco has been aggressive in protecting market share in Asia.”

State oil producer Saudi Aramco slashed its official selling prices for April crude sales to some of the lowest levels in decades, undercutting rivals. For cargoes loading in May, Aramco cut pricing even further for oil heading to Asia, and it’s expected to widen discounts to that region for June.

The case of India highlights Saudi gains. Iraq, the second-biggest member in the Organization of Petroleum Exporting Countries, edged the Saudis for the top spot in oil sales to the South Asian country for most of the last three years.

Last month, however, Iraq’s exports to India plummeted to the lowest since June 2018 as the South Asian country shut down much of its economy to counter the coronavirus and refiners there reduced operating runs and rerouted cargoes. The increase in Saudi exports to India in April almost exactly offset the decline in Iraqi sales.

Saudi Aramco made deeper pricing cuts than Iraq for its key grade for sale to Asia for both April and May. Barrels of Saudi Arab Light crude are even selling at a rare discount to Iraqi barrels for May.

Saudi exports to the U.S. surged to an average of 1 million barrels daily, the most since August 2018. Aramco generally exports to America from the Persian Gulf, but April’s flows included the first observed cargo from one of the kingdom’s Red Sea ports to the U.S. West Coast in at least three years. A second cargo embarked on the same route in early May.

The Saudis aim to defend sales from competing crude from the U.S., Russia and Africa, said Gavin Thompson, vice chairman for energy in the Asia Pacific region at consultant Wood Mackenzie Ltd. Aramco’s pricing cuts for May “gave clear notice of its strategic goal to ensure that its crude remains highly competitive in Asia,” he said in a note.