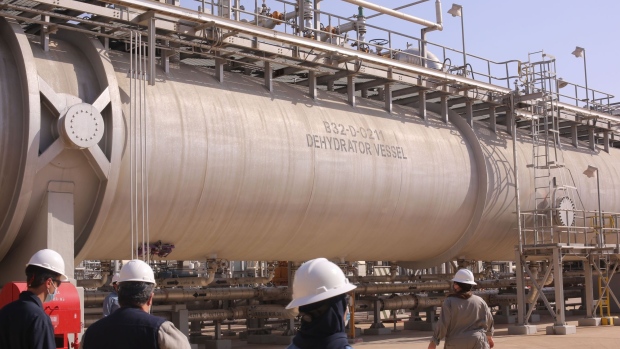 Visitors during a media tour of the Khurais Processing Department in the Khurais oil field in Khurais, Saudi Arabia, on Monday, June 28, 2021. The Khurais oil field was built as a fully connected and intelligent field, with thousands of sensors covering oil wells spread over 150km x 40km in order to increase the efficiency of the plant and reduce emississions, according to a Saudi Aramco statement released to the media. , Bloomberg

(Bloomberg) -- Saudi Arabia raised oil prices for customers in all regions as Russia’s invasion of Ukraine continues to reverberate through markets.

State producer Saudi Aramco increased its Arab Light crude for next month’s shipments to Asia to $9.35 a barrel above the benchmark it uses. That’s a jump of $4.40 a barrel from April, when the key grade was already at a record. The energy company had been expected to raise pricing by $5, according to a survey of traders and refiners.

Oil soared to more than $100 a barrel in the wake of Moscow’s attack, which has roiled financial markets across the world. Many buyers are avoiding crude from Russia. Flows from the country -- the world’s biggest oil exporter after Saudi Arabia -- have probably dropped by around 1.5 million barrels a day, according to the International Energy Forum.

Still, the Saudi hike -- likely to set the tone for other Middle Eastern grades -- comes despite a spate of virus lockdowns in China, the top oil importer.

Aramco made its decision after OPEC+ on Thursday opted to continue raising output only gradually. The 23-nation group, led by Saudi Arabia and Russia, has resisted calls from major importers including the U.S. to accelerate its production increases and bring down global fuel prices.

More than 60% of Saudi Arabia’s oil shipments go to Asia, with China, Japan, South Korea and India being the biggest buyers.