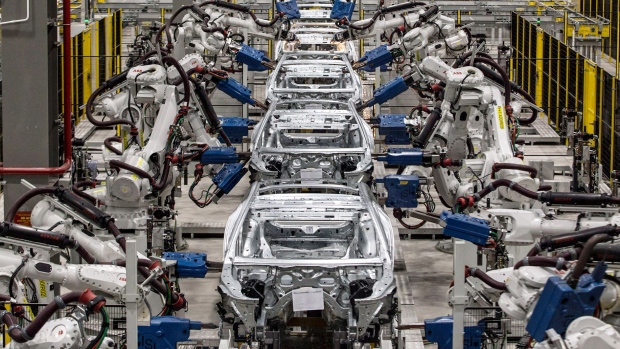 Robotic arms work on the body frames of Vinfast Lux A2.0 sedans in the body shop area of the automaker's factory in Haiphong, Vietnam. , Photographer: Yen Duong/Bloomberg

(Bloomberg) -- Saudi Arabia is in talks with auto manufacturers to establish a presence in the kingdom on the West Coast of the kingdom, according to Industry and Mineral Resources Minister Bandar Alkhorayef.

There are “a couple of projects” underway for automakers to a establish manufacturing presence in Saudi Arabia, he said in an interview in Riyadh. The King Abdullah Economic City has been chosen as the location for these projects, he said.

The kingdom is also conducting a geological survey to identify potential mineral desposits as it looks to develop its mining industry, he said. “A large number of these minerals and metals are critical to the technologies that will drive a sustainable future and are in high demand.”

Saudi Arabia has been looking to develop a car making industry in the kingdom for over a decade.

Lucid Motors, which is part owned by Saudi Arabia’s sovereign wealth fund, is looking to build a manufacturing plant as part of a strategy to develop an auto-making hub in the country, people familiar with the plan told Bloomberg in January.