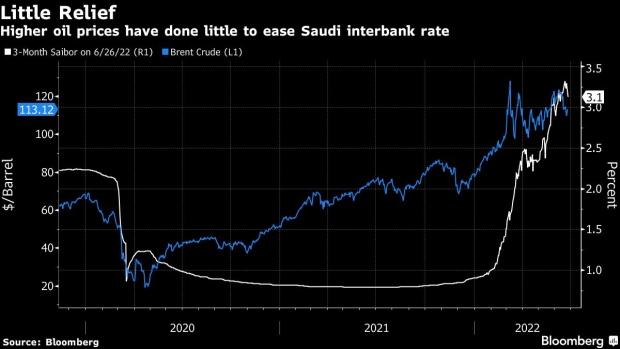 The Saudi Central Bank placed about 50 billion riyals ($13 billion) as time deposits with commercial lenders, according to people familiar with the matter, seeking to ease the worst liquidity crunch in over a decade.

The intervention started just before the US Federal Reserve’s interest-rate hike this month, and consisted of money provided to banks at a discount to the three-month Saudi Interbank Offered Rate, or Saibor, used as a benchmark to price loans, the people said, asking not to be identified as the information is private.

The central bank, also known as SAMA, didn’t immediately respond to a request for comment.

Liquidity conditions as measured by Saibor are the tightest since late 2008, when the price of crude collapsed below $40 a barrel. The extent of the funding stress among Saudi banks has little precedent outside periods when oil prices were crashing or global crises like the credit crunch of 2008-2009.

This year, by contrast, Saudi Arabia is on track to run its first budget surplus in about a decade after seeing revenues soar on the back of a rally in oil prices above $100 and rising production.

The funding from the central bank came in at least three separate tranches so far, with the first and second injection consisting of three-month deposits that totaled around 15 billion riyals each, the people said. It made at least one more placement in recent days that included both shorter and longer maturities, they said.

In a sign the latest injections by the central bank are already having an impact, the Saibor rate fell by about 17 basis points from Friday to 3.13% on Sunday, according to data compiled by Bloomberg, its biggest drop in over a month.

The action reflects growing concerns about costly liquidity for banks in Saudi Arabia and its impact on the economy as authorities look to mobilize capital to power the kingdom’s mega projects. To ease the immediate funding constraints, the central bank recently also extended the tenor on its repo facility to a maximum of 13 weeks from four.

Saudi Arabia’s finance minister told Bloomberg last month that the government would hold excess oil revenues in its current account until at least early next year, as it looks to break an oil-linked boom-bust cycle that has typified the economy in the past.

Bankers had been expecting high oil prices to more quickly translate into government deposits that would ease the liquidity crunch.

Growth in bank deposits has lagged behind Saudi credit expansion driven largely by a boom in mortgages. That has squeezed the money market while the government withholds its oil windfall as part of a more conservative approach to fiscal spending.

Saudi Arabia is set for another year of double-digit growth in consumer lending while deposits are up less than 4% so far in 2022. In 2020, the central bank extended over 100 billion riyals to local banks in liquidity injections and to cover the costs of loan deferrals for small businesses hit by the pandemic.