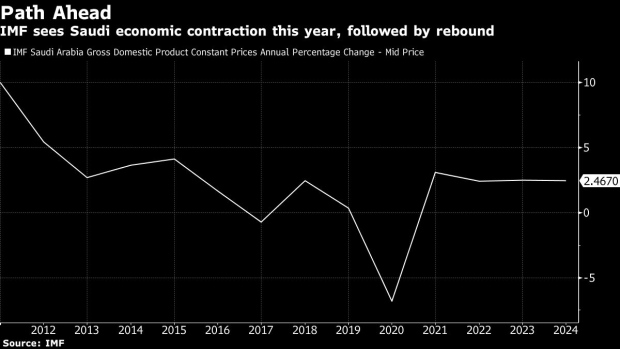 A street vendor sells fruit and vegetables on a roadside in Riyadh, Saudi Arabia, on Tuesday, May 19, 2020. Hit simultaneously by plunging crude prices and coronavirus shutdowns, the non-oil economy is expected to contract for the first time in over 30 years. , Bloomberg

Saudi Arabia doesn’t share the pessimism of the International Monetary Fund about the outlook for its economy even as it heads for a recession following a contraction to start the year.

The kingdom’s oil gross domestic product shrank an annual 4.6% in the first three months of 2020, pushing the overall economy into a decline of 1%. It also shrank in the third and fourth quarters of last year.

Non-oil GDP, which is a better gauge of economic health and an engine of job creation, grew 1.6% in the first quarter, the slowest since 2017, according to official data released Tuesday.

Facing a double crisis from the pandemic and crude market turmoil, the economy of the world’s biggest oil exporter is expected to contract 6.8% overall this year, the most in over three decades, according to the IMF, which forecasts a return to 3.1% growth in 2021.

Central bank Governor Ahmed Alkholifey said that despite the likely recession, Saudi Arabia is “less pessimistic,” with the economy on track to bounce back as coronavirus restrictions are lifted.

“In the last two weeks after reopening, we have seen a giant leap, even way more than it was before the pandemic,” Alkholifey said Tuesday during a virtual conference.

A lag in data reporting means the latest figures won’t capture the likely deterioration the economy suffered since authorities gradually began to implement restrictions to curtail the spread of the coronavirus from early March. The oil sector also probably shrank again in the second quarter because of deeper production curbs negotiated by OPEC and its allies from May through July, according to Emirates NBD, Dubai’s biggest bank.

The deceleration in non-oil activity is a particular worry because it’s a key driver of growth as Crown Prince Mohammed bin Salman tries to diversify the crude-dependent economy.

Non-oil private sector activity dropped at the fastest in over a decade in Saudi Arabia in March and has since remained below the threshold that separates growth from contraction -- despite incremental improvements in the following two months, according to Purchasing Managers’ Index surveys compiled by IHS Markit.

Despite government support packages and an easing of coronavirus-related restrictions, an indicator that tracks consumer spending was down by a third year-on-year in May and many businesses are struggling to survive amid austerity measures.

“This is likely to weigh on domestic consumption and investment even as activity starts to normalize in the coming months,” said Khatija Haque, head of Middle East and North Africa research at Emirates NBD.