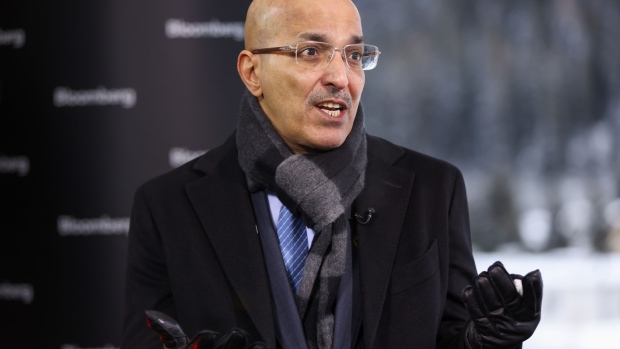 Mohammed Al-Jadaan, Saudi Arabia's finance minister, during a Bloomberg Television interview on the opening day of the World Economic Forum (WEF) in Davos, Switzerland, on Tuesday, Jan. 17, 2023. The annual Davos gathering of political leaders, top executives and celebrities runs from January 16 to 20. , Bloomberg

Saudi Arabia is open to discussions about trade in currencies other than the US dollar, according to the kingdom’s finance minister.

“I don’t think we are waving away or ruling out any discussion that will help improve the trade around the world,” Al-Jadaan said.

The world’s largest oil exporter, which has maintained a currency peg to the dollar for decades, is seeking to strengthen its relations with crucial trade partners including China. The kingdom is a pillar a petrodollar system established in the 1970s that relies on pricing crude exports in the US currency.

During President Xi Jinping’s visit to Riyadh last year, the two countries agreed to boost coordination on energy policy and exploration. During that trip Xi said that China would make efforts to buy more oil from the Middle East and also wanted to settle that trade in the yuan.

Saudi Arabia is also working with multilateral institutions to provide support to Pakistan, Turkey and Egypt, as part of the kingdom’s largesse to nations it deems “vulnerable,” Al-Jadaan said.

“We are investing heavily in these countries and will continue to look for opportunities to invest,” Al Jadaan said. “It’s very important to bring stability.”

The minister said his country is looking to invest $10 billion in Pakistan. It already extended the term of a $3 billion deposit to boost its foreign-currency reserves late last year, and Saudi Arabia is now exploring the possibility of increasing the amount.

“We are providing even oil and derivatives to support their energy needs,” Al Jadaan said. “So there is a lot of efforts, but we wanted this to be conducted.”

The kingdom is also discussing with the World Bank and other institutions how can it be “more creative to provide that support” to Pakistan, the minister said.

Saudi Arabia is also “providing a lot of support to Egypt and we’ll continue to — not directly through just grants and deposits, but also through investments,” Al-Jadaan said.

(Updates with comments on financial support for Egypt in last paragraph)