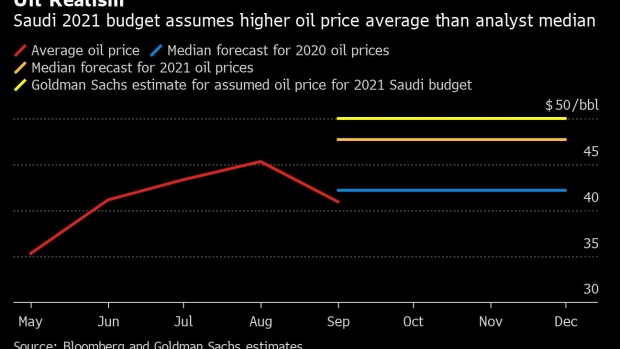 (Bloomberg) -- Saudi Arabia’s Finance Ministry seems to think that oil prices will stay around $50 a barrel for at least the next three years.

That’s according to Goldman Sachs Group Inc.’s analysis of the kingdom’s pre-budget statement released on Sept. 30.

“Using our own estimates for the breakdown of government revenues, we calculate that the numbers presented in the budget statement are based on an average oil price of around $50 a barrel between 2020 and 2023,” said Farouk Soussa, a London-based analyst at Goldman.

Brent crude fell 6.3% to $39.27 a barrel last week as more countries tightened restrictions to counter the coronavirus pandemic and U.S. President Donald Trump got infected, causing traders to fret about the outlook for energy demand.

While oil at $50 would represent a 25% rise from current prices, it would would still be far below the pre-pandemic level of around $65 and less than Saudi Arabia needs to balance its budget.

Goldman’s calculations are roughly in line with those of Cairo-based investment bank EFG Hermes, which said Saudi Arabia is basing next year’s budget on an oil price of $50 to $55. Goldman is itself more bullish, forecasting that Brent will climb to $65 by the end of 2021.

Saudi officials expect the country’s fiscal deficit to narrow to 5.1% of gross domestic product in 2021 from 12% this year as they cut spending, according to last week’s statement.

The kingdom tends to take a relatively conservative view of crude prices in drawing up its budget and doesn’t divulge its assumptions, leaving analysts to estimate them from other projections. The Finance Ministry didn’t immediately respond to a request for comment on Sunday.

Saudi Arabia would need oil to trade at $66 to balance its budget in 2021, according to estimates from the International Monetary Fund.

Saudi Arabia’s caution on prices comes as oil giants including BP Plc and Total SE predict the era of growing global demand for energy is over or coming to an end barely a decade from now.

That’s especially a concern for countries such as Saudi Arabia, where oil accounted for nearly two-thirds of government revenue in 2019. In the second quarter, Saudi earnings from crude exports dropped to the lowest on a quarterly basis since at least 2016, despite the kingdom leading OPEC’s efforts since May to cut supply and bolster prices.

“It seems they are assuming some pick-up next year, but oil income will be flat between 2021 and 2022, and will only start to pick up again in 2023,” said Mazen Al-Sudairy, head of research at Al Rajhi Capital.