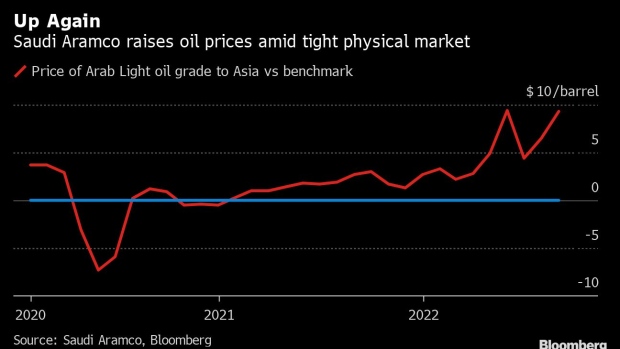 (Bloomberg) -- Saudi Arabia increased next month’s oil prices for its biggest market of Asia as underlying demand remains strong even amid growing concerns of recessions in major economies.

State producer Saudi Aramco raised its key Arab Light crude grade for Asian customers by $2.80 a barrel from July to $9.30 above the regional benchmark. The move was roughly in line with expectations, according to a Bloomberg survey of refiners and traders last week.

Oil has started the third quarter strongly after dropping in June, when fears about central banks tightening monetary policy and an economic slowdown spurred the commodity’s the first monthly loss since November. Crude is up more than 45% this year to around $113 a barrel, in large part because of the fallout of Russia’s invasion of Ukraine.

Aramco’s decision came days after OPEC+ -- led by Saudi Arabia and Russia -- agreed to raise crude output next month by almost 650,000 barrels a day. Yet most of the cartel’s members are struggling to boost supply and are expected to hit only about 50%-70% of their collective target.

Saudi Arabia sends more than 60% of its crude exports to Asia, with China, Japan, South Korea and India being the biggest buyers.