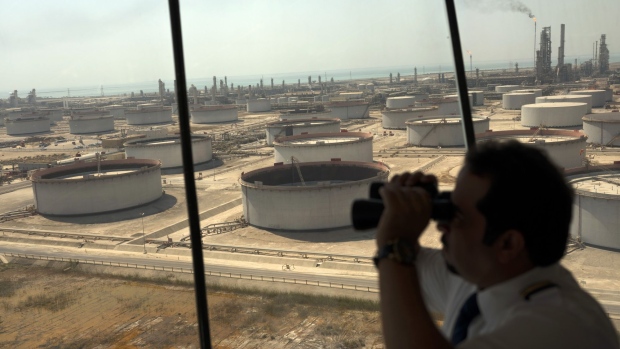 An employee uses binoculars to look out towards the Arabian Sea in the Port Control Center at Saudi Aramco's Ras Tanura oil refinery and terminal in Ras Tanura, Saudi Arabia, on Monday, Oct. 1, 2018. , Anthony Di Paola

(Bloomberg) -- Saudi Arabia raised pricing slightly for its flagship crude oil shipped to Asia, the first sign of strength in the physical market after a month and a half of weakness and crashing refining margins.

The increase in November pricing marks a change in course for the world’s biggest exporter after it pared prices in September and October as crude use stagnated. It’s potentially a sign of confidence that OPEC+ supply cuts will buoy the market even as the pandemic crimps demand.

State oil producer Saudi Aramco raised pricing for Arab Light crude for Asia, its largest regional market, by 10 cents a barrel to 40 cents less than the benchmark. Aramco had been expected to increase pricing for the grade by as much as 20 cents a barrel, to a discount of 30 cents below the Middle East benchmark, according to estimates in a Bloomberg survey of eight traders and refiners.

Refiners have suffered as profit from processing crude into fuels like gasoline, diesel and jet fuel tumbled this year amid worldwide lockdowns and travel bans. But in Asia, margins jumped at the end of September -- from very low levels. That probably influenced Aramco’s pricing decision, which came a day later than traders had expected.

For the Mediterranean region, Aramco cut official selling prices for November, and kept most pricing to the U.S. unchanged.

Oil has rallied since April, with Brent crude roughly doubling on the back of the OPEC alliance’s output cuts. Even so, the global benchmark was trading on Tuesday near $42.40 a barrel, down about 36% this year.

The OPEC+ alliance is scheduled to meet on Nov. 30-Dec. 1 to review production policy. Saudi Energy Minister Prince Abdulaziz bin Salman has threatened to wrong-foot speculators who doubt the coalition’s resolve to bolster prices. He promised last month that traders who bet on lower prices would be “ouching like hell.”

Saudi Arabia’s pricing decision usually sets the tone for other Middle Eastern suppliers, including Iraq and the United Arab Emirates, the second- and third-largest producers in OPEC.