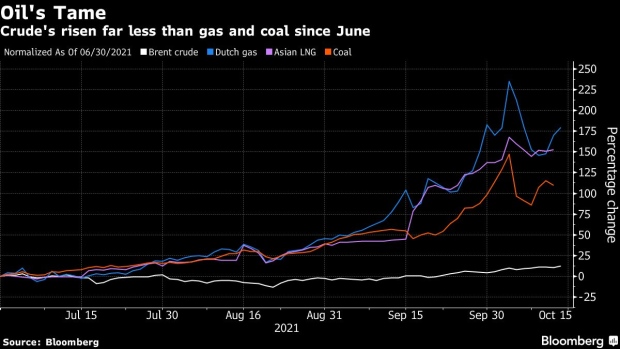 A worker adjusts a valve wheel on a section of pipework at the Comprehensive Gas Treatment Unit No.3 at the Gazprom PJSC Chayandinskoye oil, gas and condensate field, a resource base for the Power of Siberia gas pipeline, in the Lensk district of the Sakha Republic, Russia, on Monday, Oct. 11, 2021. Amid record daily swings of as much as 40% in European gas prices, Russian President Vladimir Putin made a calculated intervention to cool the market last week by saying Gazprom can boost supplies to help ease shortages. , Bloomberg

(Bloomberg) -- Oil’s stability relative to natural gas and coal underscore that OPEC+ is doing a good job balancing supply and demand, said the energy ministers of Saudi Arabia and Russia.

While crude has jumped to a three-year high above $80 a barrel, the increase has been nothing compared to volatility seen with gas and coal prices, Saudi Energy Minister Prince Abdulaziz bin Salman said on Thursday. He reiterated that the OPEC+ cartel, led by Riyadh and Moscow, should stick with gradual production increases, despite calls from many traders and even the White House for it to move faster.

“We have done a remarkable job,” he said during the Russian Energy Week conference. “Gas markets, coal markets, other sources of energy need a regulator. This situation is telling us that people need to copy and paste what OPEC has done.”

Gas futures in Asia and Europe have soared by more than 150% since the end of June, while coal’s doubled. Brent crude, by contrast, is up 12%.

The Organization of Petroleum Exporting Countries and allies including Russia and have been under pressure from major consumers to accelerate the pace of their supply increases. The calls have become louder since the surge in gas prices caused some power producers to switch to oil.

The United Arab Emirates’ Energy Minister Suhail Al-Mazrouei echoed their comments and said there was no danger of the oil market overheating because of OPEC+’s stance.

“You need to trust us because we have enough experience dealing with different cycles,” he said.

Prince Abdulaziz said he was concerned about the oil market shifting to a supply surplus in 2022 and ending the year with a “huge amount of over stocks.”

“We’ll have a challenging year,” he said. “We keep telling people we should look way beyond the tip of our noses.”

Several traders and Wall Street banks forecast that global oil demand will drop below supply around early 2022. The daily balance will change from a supply deficit of around 1.5 million barrels now to a surplus of almost 2 million by March, according to JPMorgan Chase & Co.