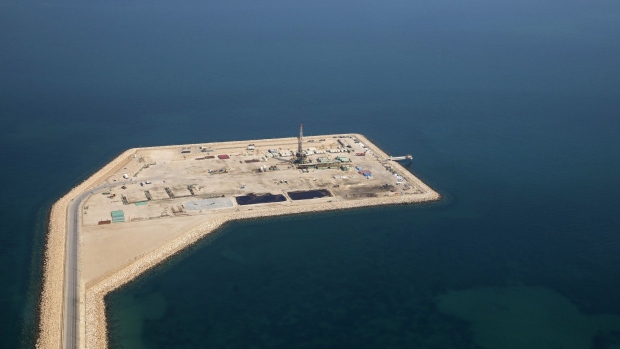 An oil drilling rig stands on one of the Causeway islands in the Manifa offshore oilfield, operated by Saudi Aramco, in Manifa, Saudi Arabia, on Wednesday, Oct. 3, 2018. Saudi Aramco aims to become a global refiner and chemical maker, seeking to profit from parts of the oil industry where demand is growing the fastest while also underpinning the kingdom’s economic diversification. Photographer: Simon Dawson/Bloomberg , Vivian Nereim

Saudi Arabia’s net foreign assets rose 2% in June, recovering slightly from their lowest level in more than a decade as higher oil prices gave the kingdom a boost.

Net foreign assets declined significantly in 2020 as lower oil income strained finances and officials transferred $40 billion to the kingdom’s sovereign fund to fuel an investment spree. The indicator -- which topped $700 billion in 2014 after an oil boom pumped up savings -- now stands at 1.66 trillion riyals.

Most economists say that’s more than enough to defend the riyal’s peg to the dollar, and rising oil prices could further lift the fortunes of the world’s largest crude exporter in the months ahead.