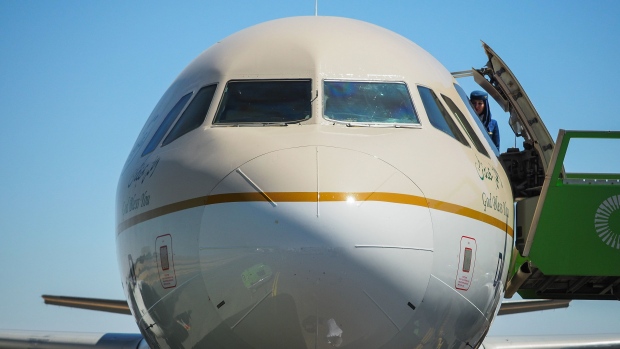 An employee waits for visitors to an Airbus SE A320-214 aircraft, operated by Saudi Arabia Air Lines at the Saudi Air Show at Al Thumamah airport in Riyadh, Saudi Arabia, on Tuesday, March 12, 2019. Saudi Airshow is the first Aviation & Aerospace Exhibition of its kind in the Kingdom of Saudi Arabia. , Bloomberg

(Bloomberg) -- Saudi Arabia’s bid to recruit a chief executive officer for a new national airline is nearing a conclusion after earlier prospects for the post shied away from the role, according to people with knowledge of the situation.

Current and former chiefs at American, European and Mideast airlines were approached by corporate headhunters before deciding against getting involved, two people said, asking not to be named because the matter is private.

The country’s sovereign Public Investment Fund, in charge of establishing the airline, has since selected an appointee, with an official announcement due in the coming months, according to a person familiar with its plans. They said that no one else was formally offered the job, and that a board has been chosen and advisers retained as the process moves forward.

PIF itself declined to comment on the recruitment of the CEO.

Saudi Arabia said in June last year that it would found a second national airline alongside flag carrier Saudia as part of the Vision 2030 push to make the economy less dependent on oil. While the startup would predominantly serve the capital Riyadh, which has ambitions to become a global business hub, it would also seek to compete with larger Gulf carriers for global transfer traffic.

A perceived lack of clarity around the new airline and Saudi Arabia’s future aviation landscape was one issue for some of the higher-profile figures approached about the CEO role, some of the people said.

According to plans previously announced, Saudia, as Saudi Arabian Airlines is known, would remain focused on its current base in Jeddah, catering to the Hajj and Umrah pilgrimage markets, together with Red Sea tourism.

Other carriers in the kingdom include Flyadeal, the low-cost arm of Saudia, and discount rival Flynas.

Saudi Arabia said in June it would incentivize airlines to fly routes to the country from major global cities in a bid to boost tourist numbers. The kingdom is looking to lift arrivals to 100 million a year by 2030.

(Updates with approach from headhunters in second paragraph, absence of formal offer to earlier candidates in third)