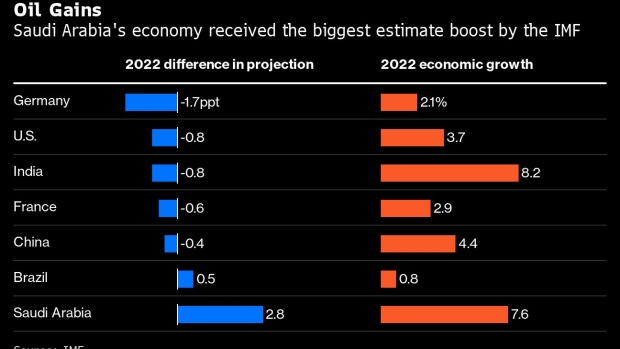 (Bloomberg) -- Saudi Arabia announced a spending boost that will sharply narrow next year’s budget surplus as it looks to tackle the impact of inflation and use its oil windfall to accelerate the development of economic diversification projects.

The kingdom’s Finance Ministry said in a preliminary budget statement on Friday that it expects a surplus of 9 billion riyals ($2.4 billion) next year, or 0.2% of gross domestic product -- smaller than an earlier estimate of 27 billion riyals.

The world’s top oil exporter has emerged from the pandemic with a fast-improving balance sheet thanks to a rebound in crude. But now it has to balance the uncertainty in the oil market with the needs of an economy that still relies heavily on the flow of petrodollars into the government’s coffers.

Much of next year’s spending will be used to mitigate higher prices, according to the statement. Although he kingdom’s inflation is estimated at 2.6% this year, among the lowest globally, the economic fallout has already been severe enough for Saudi Arabia to roll out financial support for its poorest citizens in July.

The government is on track to balance the books a year ahead of schedule and wants to keep its budget in the black in the coming years after collecting a windfall from oil sales.

It maintained its prediction for a 90 billion-riyal fiscal surplus this year and sees economic growth accelerating 8% by the end of 2022, with non-oil GDP growing nearly 6%, according to the statement.

The kingdom will also look to use the budget surplus to replenish reserves, make additional transfers to sovereign wealth funds, and potentially boost spending on projects intended to help diversify the economy away from a reliance on crude sales, Finance Minister Mohammed Al-Jadaan said in comments on Twitter.

The government’s expected revenues next year likely assume oil prices will average around $76 a barrel, according to Al Rajhi Capital.

In April, the International Monetary Fund raised its 2022 Saudi growth forecast by almost 3 percentage points, after Russia’s war on Ukraine drove oil prices higher. That was the biggest boost among major global economies. The fund projects growth next year at 3.6%.

Officials last year said the kingdom intends to decouple expenditure from crude market volatility, discontinuing a trend of raising spending when Brent prices are higher. Al-Jadaan told Bloomberg earlier this year that the government will hold billions of dollars from its oil windfall in its current account and only decide how to distribute the money by the end of the year.

Domestic and foreign borrowing activity is set to continue, according to the pre-budget statement, with the aim of paying back accumulated debt throughout the coming year.

The kingdom needs oil prices at $69 per barrel to balance its books next year, according to the IMF, which is far below the median of estimates for international benchmark Brent crude in Bloomberg’s commodity forecasts survey.

A revenue crunch during the pandemic pushed the kingdom to triple value-added tax and trim public-sector pay, drawing complaints from some citizens.

Brent crude prices have moderated since the beginning of the year, trading at around $88 a barrel on Friday, down from the year’s average of above $100 per barrel.