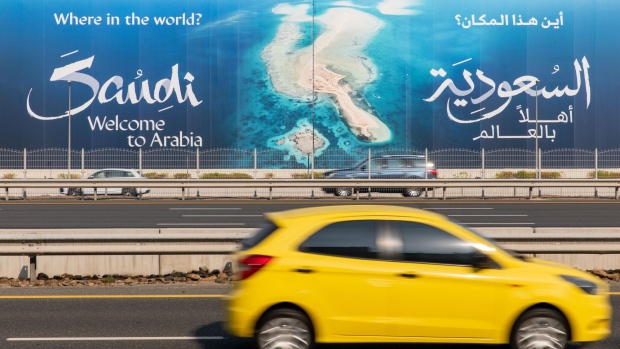 Motorists pass a giant billboard advertisement for the Saudi Arabian tourist board on Sheikh Zayed Road in Dubai, United Arab Emirates, on Friday, Oct. 18, 2019. Already pursuing a piecemeal transformation to prepare for the post-oil era, Saudi Arabia has embarked on a makeover no less momentous with its recent drive to attract holidaymakers for the first time, showing it’s even willing to bend rules on how foreign women dress. , Bloomberg

(Bloomberg) -- Saudi Arabia plans to combine two state-controlled developers on the Red Sea coast as the kingdom pushes ahead with opening up for more tourists.

The Red Sea Development Co. will take over Amaala, both owned by the country’s sovereign wealth fund and building adjacent tourist destinations, John Pagano, chief executive officer of both companies, said in an interview Monday. He declined to give financial details.

Opening up to tourism is one of the ways Saudi Arabia intends to diversify its economy and cut its reliance on oil. Its other ambitious projects include an entertainment hub near the capital and a new city in the north-west called Neom that’s expected to cost $500 billion to build.

Saudi Arabia’s ACWA Power, one of the country’s main vehicles for building renewable energy projects, will build a battery storage facility at the site to ensure it can run on renewable power, Pagano said. “For at least a small period of time, our claim to fame will be the biggest battery storage system in the world.”