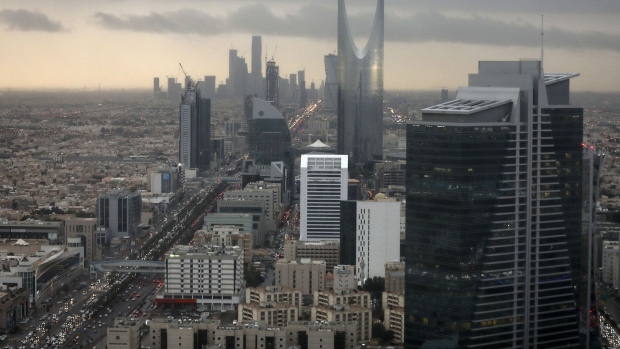 The Kingdom Tower, operated by Kingdom Holding Co., centre, stands on the skyline above the King Fahd highway in Riyadh, Saudi Arabia, on Monday, Nov. 28, 2016. Saudi Arabia and the emirate of Abu Dhabi plan to more than double their production of petrochemicals to cash in on growing demand. , Photographer: Simon Dawson/Bloomberg

Saudi Arabia’s sovereign wealth fund expects to spend “a lot” of the US$26 billion proceeds from the sale of shares in Saudi Aramco in the domestic economy as it shifts focus toward high-impact local investments, Finance Minister Mohammed Al Jadaan said.

Asked how the Public Investment Fund would use the windfall from the Aramco initial public offering, Jadaan told Bloomberg in an interview that “a lot of their allocation will go into the local economy, sectors that are promising, sectors that are large, require a large investment which the private sector cannot really invest on their own.”

Selling a stake in oil giant Aramco is the first major government privatization since Crown Prince Mohammed Bin Salman, the kingdom’s de facto ruler, announced plans for an overhaul of the Saudi economy in 2016. The sale is the biggest IPO ever, and means the world’s most valuable listed company will be an oil company traded on the Saudi stock exchange and not a U.S. technology giant.

While not the mega-sized offering initially outlined, the Aramco deal still gives the kingdom’s sovereign fund ammunition to help develop various projects around the country, including a futuristic new city called Neom that is expected to cost US$500 billion.

Jadaan, who sits on the board of the PIF and Saudi Aramco, said the sovereign fund was in the process of reviewing how much it invests internationally against its domestic commitments. “They wanted to make sure that they spend where it matters,” he said. “Most likely the preference will be more local than international, but they are continuing to be an important investor internationally.”

Saudi Arabia will continue to sell bonds next year as it looks to fund a budget deficit set to rise to 6.4 per cent of economic output in 2020, from 4.7 per cent, Jadaan said. The government is planning to issue local currency debt and sell bonds internationally, in addition to eyeing new funding sources, including export credit agencies, to help fill the budget gap.

The funding mix will “depend a lot really on the market conditions,” Jadaan said. “Whether it is locally or internationally, and the currencies, and whether it is ECAs or other alternative financing or sukuk or bonds. But these are options that are being studied by the Debt Management Office and will be decided at the time.”

Since tapping international debt markets for the first time in 2016 Saudi Arabia has become a regular issuer. It raised 113.5 billion riyals from domestic and international investors in the year to October, including the first euro-denominated sale in July.