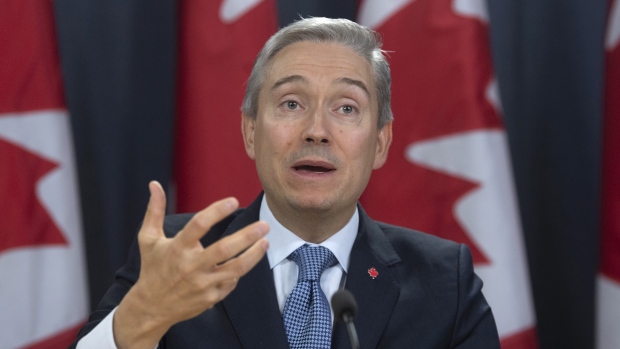 OTTAWA -- The federal government says it has improved a controversial contract to sell light-armoured vehicles to Saudi Arabia by making its details more transparent to the Canadian public.

The Liberal government has been under pressure since winning power in 2015 to cancel the $14-billion contract between Saudi Arabia and Ontario-based General Dynamics Land Systems-Canada because of concerns over Saudi Arabia's poor human-rights record.

The Liberals have said they were hamstrung by the confidentiality provisions of the contract, which was negotiated by the previous Conservative government in 2014, and that cancelling it could cost jobs in the manufacturing sector.

"We can confirm that the cancellation of this $14-billion contract -- or even the mere disclosure of any of its terms -- could have resulted in billions of dollars in damages to the government of Canada, with potential damages amounting to the full value of the contract," Foreign Affairs Minister Francois-Philippe Champagne and Finance Minister Bill Morneau said in a joint statement on Thursday.

"This would have put the jobs of thousands of Canadians at risk, not only in southwestern Ontario but also across the entire defence industry supply chain, which includes hundreds of small and medium enterprises."

The government says it has been able to make significant improvements to the contract.

"This includes now being able to communicate more transparently with Canadians about certain terms of the contract."

The statement says the new deal will eliminate Canada's exposure to risk "where future export permits are delayed or denied if there is an infringement of the permit's end-use assurances -- which ensure that the vehicles are used only for the stated purpose."

Human-rights groups have said Canada's sale of the vehicles was improper because Saudi Arabia could use them to violate the rights of its own people. But the government has previously maintained that it has found no evidence the vehicles were used for that purpose.

"Under our law, Canadian goods cannot be exported where there is a substantial risk that they would be used to commit or to facilitate serious violations of international humanitarian law, international human-rights law or serious acts of gender-based violence," said Thursday's statement from the two ministers.

"We need to ensure that we are always ready to strengthen available tools to conduct proper due diligence on all exports, as Canadians expect."

The government says it is creating an arm's-length advisory panel to review best practices on arms exports to better comply with the United Nations Arms Trade Treaty.

The government also says it will "spearhead multilateral discussions" to strengthen compliance with the treaty and establish "an international inspection regime."