Saudi Aramco overtook Apple Inc. as the world’s most valuable company, stoked by a surge in oil prices that is buoying the crude producer while adding to an inflation surge that is throttling demand for technology stocks.

Aramco is near its highest level on record and with a market capitalization of about US$2.43 trillion, surpassed that of Apple for the first time since 2020. The iPhone maker fell 3.9 per cent in New York to US$148.50, giving it a valuation of US$2.41 trillion at 1:05 p.m. in New York

Even if the move proves short-lived and Apple retakes the top spot again, the role reversal underscores the power of major forces coursing through the global economy. Soaring oil prices, while great for profits at Aramco, are exacerbating rising inflation that is forcing the Federal Reserve to rise interest rates at the fastest pace in decades. The higher rates go, the more investors discount the value of future revenue flows from tech companies and push down their stock prices.

Earlier this year, Apple boasted a market value of US$3 trillion, about US$1 trillion more than Aramco’s. Since then, however, Apple has fallen by 16 per cent while Aramco is up 27 per cent. 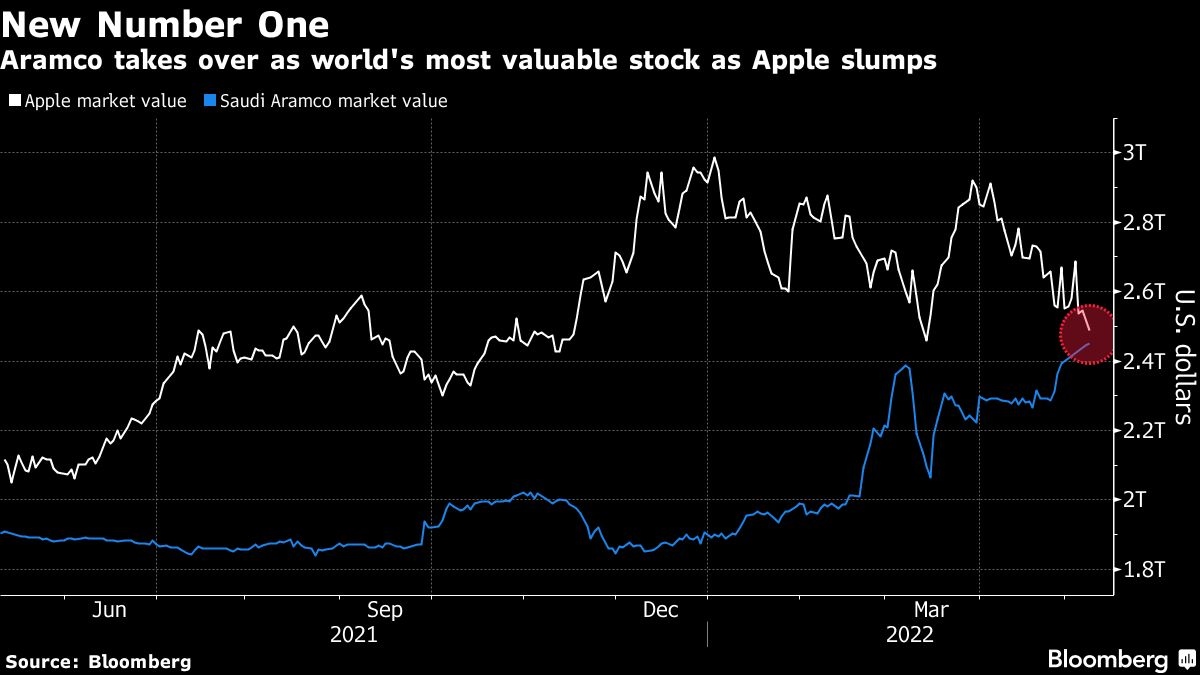 With the Fed on pace to further raise rates by at least another 150 basis points this year and with no prospects yet of a resolution for the conflict in Ukraine, it may be a while until tech regains dominance, according to Tim Ghriskey, senior portfolio strategist at Ingalls & Snyder.

“There’s panic selling in a lot of tech and other high-multiple names, and the money coming out of there seems headed in particular for energy, which for now has a favorable outlook, given commodity prices,” he said. “Companies like Aramco are benefitting significantly from this environment.”

The year’s weakness in technology shares has come amid concerns over inflation and a more aggressive policy stance from the Fed. Apple’s recent results also underlined the difficulties it is facing from supply constraints. However, the stock is still seen as a relative safety play within the sector, given its steady growth and balance-sheet strength -- factors that have limited its decline this year. The stock’s year-to-date drop is smaller than the 24.8 per cent decline of the Nasdaq 100 Index.

Apple remains the largest stock among U.S. companies. Microsoft Corp., in second place, has a market capitalization of US$1.96 trillion.

Meanwhile, the S&P 500 Energy sector has soared 39 per cent this year, supported by a rally in the price of Brent crude oil which has gone from about US$78 a barrel at the start of the year to US$108.