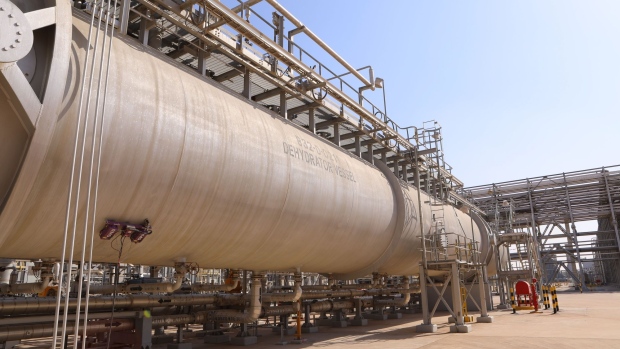 A dehydrator vessel pipe at the Khurais Processing Department in the Khurais oil field in Khurais, Saudi Arabia, on Monday, June 28, 2021. The Khurais oil field was built as a fully connected and intelligent field, with thousands of sensors covering oil wells spread over 150km x 40km in order to increase the efficiency of the plant and reduce emississions, according to a Saudi Aramco statement released to the media. Photographer: Maya Sidiqqui/Bloomberg , Bloomberg

The Riyadh initial public offering of Saudi Aramco Base Oil Co., a refining unit of the state-owned oil producer, was covered within hours of the company opening its books, continuing the strong demand for Middle Eastern share sales.

Saudi private equity firm Jadwa Investment is selling 50 million shares in Luberef, as the company is known, for 91 riyals to 99 riyals apiece, according to a statement. That could raise as much as 4.95 billion riyals ($1.32 billion), valuing the refiner at 16.7 billion riyals.

The IPO opened for institutional investors on Sunday, and the books were covered throughout the price range within hours, according to terms of the deal seen by Bloomberg News.

Luberef, with operations in the industrial cities Jeddah and Yanbu, is 70% owned by Saudi Aramco, with the rest held by Jadwa, which is selling the entire stake it acquired in 2007 from Exxon Mobil Corp. Institutional investors can bid for shares until Dec. 9, while retail investors can subscribe from Dec. 14 to Dec. 18. The final price is expected to be announced Dec. 11.

Luberef becomes the latest billion-dollar plus IPO in the Gulf, which has emerged as a bright spot for listings against a gloomy macroeconomic backdrop elsewhere dominated by inflation fears and rising interest rates. High oil prices have benefited Gulf economies, markets and companies’ balance sheets, helping drive a flurry of listings.

IPOs in the region have raised $19.2 billion so far in 2022, an amount that would be a record for a year if it weren’t for 2019, when Aramco had its $29.4 billion IPO. However, while investor demand for new listings has held up, the after-market performance has been weaker as regional equity indexes have come off earlier highs, tracking a decline in oil.

Luberef operates two production facilities on Saudi Arabia’s west coast, producing various base oils and byproducts including asphalt, marine heavy fuel oil and naphtha. They are mainly sold in the Middle East, North Africa and India, and more broadly across Asia, the Americas and Europe. The company has said demand for base oils globally is expected to grow by about 5 million metric tons between 2022 and 2030.

--With assistance from Shaji Mathew.

(Updates with IPO books covered in first and third paragraphs.)