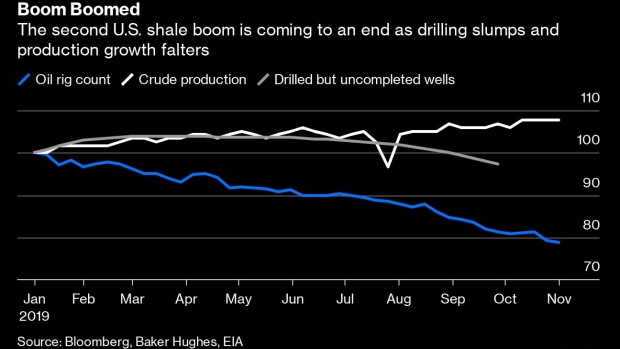 (Bloomberg Opinion) -- In finance, as in comedy, timing is everything. Get it right and you have investors (or the audience) in the palm of your hand. Get it wrong and the ensuing silence is painful.

Saudi Arabia has stepped on stage finally to launch the initial public offering of its oil monopoly Saudi Aramco. By a strange quirk of the calendar, the price of the shares will be set on the same day OPEC meets to decide the next step in its strategy of propping up the price of crude.

It’s hard to see this coincidence as anything other than unhappy for Riyadh. To get the best price for its Aramco shares, it needs to stop the oil price from weakening. Yet this leaves it at the mercy of members of the OPEC+ group of nations that haven’t been doing their fair share of cutting crude production to shore up the price: namely Russia and Iraq, who’ve preferred to let the Saudis shoulder the burden along with their allies Kuwait and the United Arab Emirates.

The kingdom and its bankers are in a difficult spot as they try to convince potential Aramco investors that the company won’t bear an undue share of the burden of the output cuts. That would be a tough sell at the best of times; it’s even harder in the run-up to the OPEC meeting, which may need to prolong the current production cuts beyond March 2020, and even deepen them. While it’s crucial for Aramco to put a floor under the crude price, it’s also important that the company isn’t having to slash output.

Moscow and Baghdad will be perfectly aware of the pressure on the kingdom to prop up the price because of the looming IPO. If they refuse do their bit, they know Riyadh will just have to do more.

OPEC’s Secretary General Mohammad Barkindo is doing his best to help the Saudis, painting as positive a picture as he can. He says next year is “looking brighter” for producers in terms of supportive news for the crude price, with “upside potential that may actually surprise the market.”

China and the U.S. are inching toward a partial settlement of their trade dispute, offering hope of a boost to demand, though its hard to rely on the whims of President Donald Trump. At the same time, the second U.S. shale boom is coming to an end, removing some excess supply from the market. However, there will still be output growth next year from other non-OPEC+ states such as Norway, Brazil and Guyana.

Saudi Arabia is pressing the output cut laggards to shoulder more of the burden, but the looming IPO ties its hands. Russia’s oil industry is already balking at more output cuts.

And the pressure on the Saudis won’t end on Dec. 5, the day of the IPO price-setting and the OPEC meeting. Once those shares are priced, the kingdom can’t afford to let them fall. This is only the first tranche of stock that is likely to be sold. A poor performance now could fatally undermine interest in any future offering.

In its struggle to drive OPEC+ production policy, Saudi Arabia's dependence on oil revenues already ties one hand behind its back. Now it’s going to be constrained too by the needs of investors in Aramco. Crown Prince Mohammed Bin Salman is clearly in a hurry. This is one instance where a pregnant pause may have strengthened his punchline.