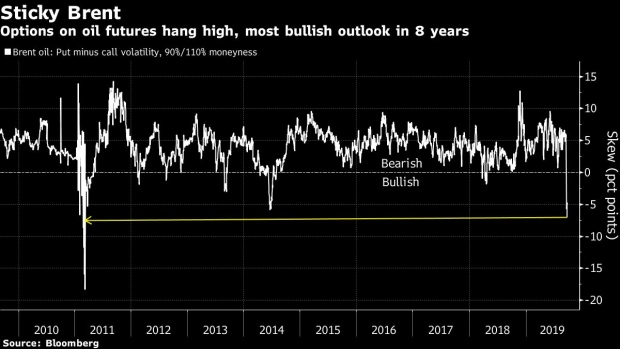 (Bloomberg) -- Options traders have become the most bullish on Brent crude in eight years as the aftermath of last weekend’s attack on a Saudi Arabian processing facility stirs up concern about the security of oil supplies.

The unprecedented strike and cross-accusations involving Saudi Arabia and Iran in the past week have driven up the price of one-month benchmark calls to their most expensive relative to puts since March 2011, even after the desert kingdom tried to assure its customers that the oil flow won’t be curtailed.

The situation for Middle East oil security has gradually become more volatile after the U.S. imposed sanctions again on Iran last year. After attacks on tankers, a pipeline and an oil field and the downing of a U.S. drone, last weekend came the airborne attack on Saudi Arabia’s Abqaiq facility that created the biggest ever outage in crude production.

Iran denied involvement in Abqaiq, though on Wednesday U.S. President Donald Trump said he asked the Treasury to “substantially” increase sanctions on the Islamic Republic.

“Putting Iran against the wall with no room to move is very dangerous,” Ole Hansen, head of commodities strategy at Saxo Bank A/S in Copenhagen, said by email. “The risk premium should stay in the market for several weeks until the risk of an escalation fades.”

--With assistance from Michael Roschnotti and Julian Lee.

To contact the reporters on this story: Todd White in Madrid at twhite2@bloomberg.net;Eddie van der Walt in London at evanderwalt@bloomberg.net

To contact the editors responsible for this story: Samuel Potter at spotter33@bloomberg.net, John Deane, Michael Roschnotti