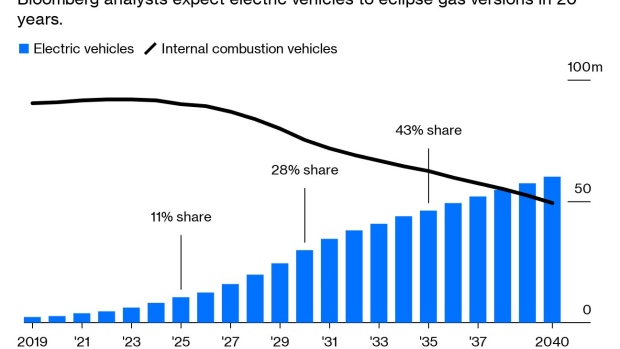 (Bloomberg Opinion) -- On Saturday, the Houthis, a Yemeni rebel group fighting against a coalition led by Saudi Arabia, took credit for a strike that knocked out two key Saudi oil processing facilities.

At a single stroke, Saudi oil production was cut from 9.8 million barrels a day to 4.1 million, sending prices soaring. That means about 5% of the entire world’s oil production suddenly went offline. This is an unprecedented disruption – bigger in absolute terms than any of the famous oil shocks of previous decades:

Naturally, the Saudis are scrambling to get production up and running again, and the country’s large stockpiles of oil should cushion the blow to customers. But even though the Saudis say they have restored some of the lost production, world supplies may be limited because other nations simply don’t have much spare capacity to fill the gap.

More fundamentally, if critical Saudi infrastructure can be taken out with a relatively cheap, low-tech drone strike, it doesn’t bode well. The war in Yemen will likely continue, and the Houthis, encouraged by this smashing success, probably will launch more such attacks. A wider war, especially if it pulled in Iran and the U.S., would be even more disruptive.

Thus, the world could be facing a substantial rise in oil prices.

Conventional wisdom is that big oil price spikes lead to recessions in the U.S. Economist James Hamilton has shown that each oil shock since the end of WW II was followed by a U.S. downturn. Most recently, oil more than doubled in the year before the 2008 financial crisis. Thus, the Houthi militia might end up sending the U.S. into an economic tailspin right before an important presidential election.

Such an outcome isn’t set in stone. Economists Lutz Kilian and Robert Vigfusson argue that Hamilton’s assumptions are flawed, and that oil prices play only a modest role in recessions. Meanwhile, the U.S.’s situation has changed a lot in the past decade. Thanks to the rise of hydraulic fracturing, the U.S. is close to being a net oil exporter:

A rise in oil prices will make many fracking projects profitable that would otherwise sink into bankruptcy. That could cause a production surge that offsets the decline elsewhere in the economy.

Most other industrialized countries won’t be so lucky. Advanced nations in Europe and Asia, as well as China and India, will see fuel costs rise, which could slow their economies and indirectly hurt the U.S. through reduced trade. Even if oil prices are only a minor cause of recession, the current shock comes on top of a damaging trade war and declining consumer confidence.

The Houthi raid may thus serve as a reminder how dependent the world still is on cheap Middle Eastern oil and the dysfunctional regimes that keep it flowing. Despite all the effort the U.S. has put into becoming energy independent, and despite how much other countries have diversified their energy mixes, the global economy relies too much on this single commodity.

This situation has gone on for too long. The world needs to switch to non-oil power sources for transportation as quickly as possible. The most promising way to do this is to move to battery-powered vehicles. As things stand, with battery costs coming down, electric vehicles are forecast to outnumber their gas-powered cousins in the U.S. in about 20 years:

This is faster than many expected, but still too slow. The U.S. and other rich countries should attempt to make the change in half of that time.

Several policies will be needed. First, the government should increase subsidies for vehicle batteries because producing at larger scale allows companies to figure out ways to produce things more cheaply. Second, the government should set standards to ensure that all electric-vehicle charging stations be interoperable so that any EV can be charged from any station. This will make sure EV drivers always have a place to recharge their cars. Third, the government should dramatically increase research funding for next-generation storage and charging technologies, as well as advanced biofuels or other oil alternatives to allow airplanes to go oil-free.

Getting off oil as fast as possible solves several problems at once. In addition to the obvious benefit of slowing climate change, it will make advanced economies less vulnerable to drone strikes by ragtag militias halfway around the world. If the Houthi attacks serve as an impetus that hastens the end of the petroleum age, then this debacle will end up having a positive outcome in the long run.