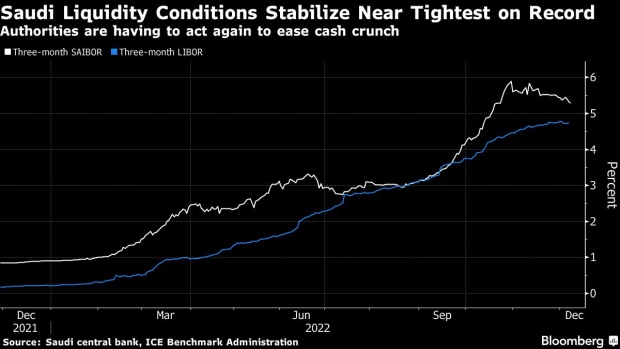 “I’m not worried about liquidity,” Mohammed Al-Jadaan told reporters in Riyadh on Wednesday. “There are sufficient levers at the central bank disposal, including using our money.”

The cost of money as measured by the three-month Saudi Interbank Offered Rate, or Saibor, surged to a record this year, rising higher than it did during the 2008 global financial crisis. A 50 billion riyal ($13 billion) injection by the central bank in June helped ease liquidity conditions through the summer before they started to tighten again.

Recently, the central bank, known as SAMA, has been relying on open market operations — transactions that allow it to provide or drain short-term liquidity in exchange for securities from lenders, Bloomberg News reported. Saibor is down to 5.28% this month.

The world’s largest oil exporter is on track to run its first budget surplus in about a decade after seeing revenues soar on the back of higher oil production and a rally in prices above $100 a barrel. Next year’s budget surplus is now seen at 16 billion riyals.

Al-Jadaan said the government will continue to access debt markets with the kingdom’s sovereign wealth fund, the Public Investment Fund, following through on its plans.

“We are prepaying maturing debt,” he said. “If there are market opportunities to actually increase our debt, even if we don’t need it immediately, we will.”

Saudi Arabia has a $3 billion bond maturing next year and another $1 billion in 2024, according to data compiled by Bloomberg.