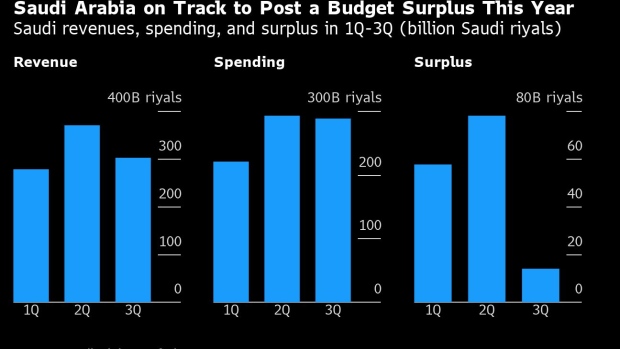 (Bloomberg) -- Saudi Arabia’s central bank has stepped up the use of a mechanism to pump money into the financial system as it looks to tackle a liquidity crunch that has helped push borrowing costs for lenders to the highest in decades, according to people familiar with the matter.

The latest intervention is relying on open market operations, the people said, transactions that allow the central bank to provide or drain short-term liquidity in exchange for securities from lenders.

Unusually for a period of high oil prices, Saudi banks are facing a shortage of liquidity. A rapid rise in lending that’s not been matched by deposit growth has left banks clamoring for funding. Meanwhile, an expected influx of government deposits from soaring crude receipts has not materialized and a previous central bank liquidity injection provided only temporary relief.

The monetary authority has stepped up its use of open market operations over the past few weeks to tackle the issue, the people said, asking not be named because the information is private. The effort by SAMA, as the central bank is known, helped stabilize the interest rate banks charge one another for loans, though it remains near a record high.

SAMA didn’t immediately respond to a request for comment.

Policymakers are trying a new tack months after bank liquidity came under unprecedented pressure as an expansion of credit outpaced deposit growth and Saudi Arabia largely matched four successive 75 basis-point rate hikes by the US Federal Reserve to maintain its currency peg against the dollar.

“Small bouts of cash injections by the central bank are only a band-aid fix to structural liquidity issues faced by banks. SAMA should not be seen as the main source of funding, its policy should encourage banks to rely on more sustainable sources of financing like tapping into capital markets and securitizing mortgages.”

Around June, the Saudi central bank placed about 50 billion riyals ($13 billion) as deposits with commercial lenders, Bloomberg reported at the time. The injection of funds at a discount to the three-month Saudi Interbank Offered Rate, or Saibor, eased liquidity conditions through the summer before they started to tighten again.

The funding stress intensified in October, with the three-month Saibor peaking at a record of just under 6%. It’s since dropped by nearly half a point even as Saudi Arabia followed the Fed again in November and raised its policy rates by 75 basis points. The rate fell to 5.37% on Thursday, the lowest since Oct. 23.

“Higher policy rates are partly to blame for the higher Saibor rates but a domestic liquidity squeeze is adding to the pressures,” said Farouk Soussa, an economist at Goldman Sachs Group Inc. “Banks are competing strongly for market share through aggressive loan-book expansion which is happening at a rate that far exceeds deposit growth.”

Saudi authorities are trying to assert control over the cost of money for banks because the liquidity crunch threatens to undermine their ability to fund the kingdom’s construction pipeline estimated at over $400 billion over the next five years, according to MEED data, part of an economic makeover to diversify away from oil.

Fitch Ratings warned this month that lending growth risks decelerating next year if the central bank doesn’t step in with further liquidity support. Higher interbank rates can also ricochet across the economy by boosting the cost of borrowing for consumers and businesses.

Pressure in the kingdom’s banking system has been building by a degree unmatched except during periods when oil prices were crashing or global crises like the credit crunch of 2008-2009.

This year, by contrast, Saudi Arabia is on track to run its first budget surplus in about a decade after seeing revenues soar on the back of a rally in oil prices above $100 and higher production.

Earlier this year, the government said it would hold billions of dollars worth of windfall revenue in a current account until the end of the year and only then decide how to distribute it.

Saudi banks have tried to cope by raising capital in the market and tapping more interest-bearing deposits. Lenders including Al Rajhi Bank and Riyad Bank issued about $7 billion in debt this year, an amount comparable to their counterparts in the United Arab Emirates but at a higher spread, according to an analysis by Bloomberg Intelligence.

The question is if the latest intervention will leave a more lasting mark on the local interbank market as the Fed delivers further rate hikes, with a plan to raise its benchmark by 50 basis points at its final meeting of the year on Dec. 13-14.

“The rising Saibor premium appears to be driven by strong demand so an injection of liquidity by SAMA will help,” said Tarek Fadlallah, head of Nomura Asset Management’s Middle East business. “But banks may need to additionally lure substantial private-sector deposits in order to maintain the current pace of lending.”

--With assistance from Fahad Abuljadayel and Farah Elbahrawy.